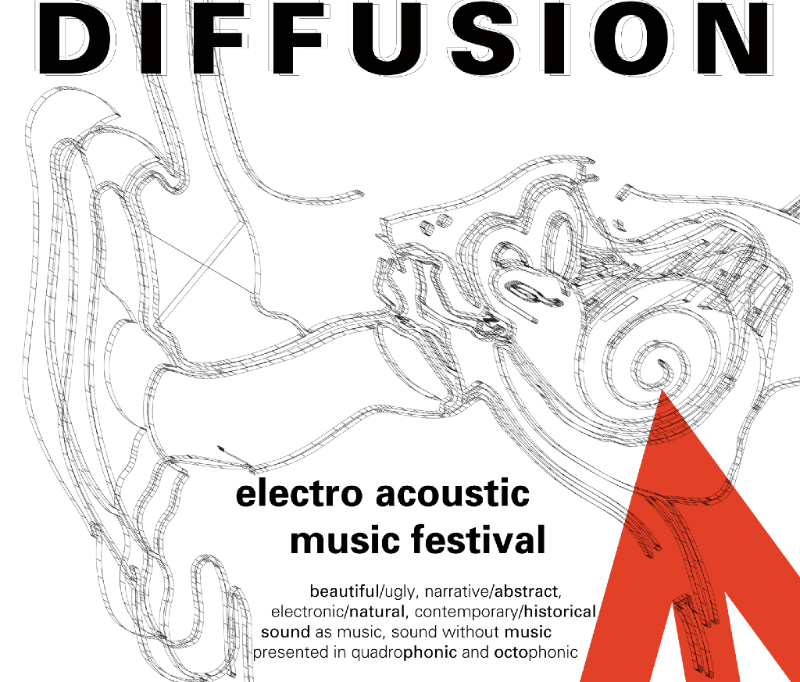 Diffusion is concerned with multi-channel electro-acoustic music, both brand new and historical.

Some of these sound pieces are made with just microphones, some of them are made with only electronic instruments, much of it is made with a combination of both. Some are played on 4 speakers, some on 6 speakers and some on 8 speakers!

Listening, in this medium is different from “normal” music—think of it as the difference, on a hot day, between standing in front of an air conditioner and going swimming in a cool lake. Seats are taken, the lights are dimmed and the sound commences; there is nothing to see, everything is seen with the ears.

We will host the premiere of a piece, not diffused, but performed in 8 channels by local electronic musician Rjyan Kidwell. He has been making digital/electronic music for something like 20 years under various monikers, but his best known was “Cex”.  Tonight (as far as I know) there won’t be any rapping but pure delicious electronic tones generated with FM synthesis.

Also the premiere of the first work of the multi-channel kind by local wonder woman Stephanie Barber. It is, as far as I know, untitled, but on a personal note she told me the content is, “very embarrassing”…

Lastly a work excerpted from a larger work by Londoner, Vicky Bennett, also known as “People Like Us.” The larger piece is an hour long video work that involves not just 6 channels of audio, but TEN video screens of continuous content. I want to see it one day, but in the meantime I know the density of her audio work will suffice to illuminate.  “Gone, gone, beyond”

WHEN: SATURDAY, November 10th
WHERE: Fred Lazarus Hall in the MICA building at 131 North Avenue

Madalyn Merkey, primarily a synthesist from Oakland, California has provided us with “Room Study for Eight Audio Channels” She told me in an email, “recorded in my studio apartment in Oakland, California by placing a shotgun microphone outside my apartment door. I recorded each channel one at a time with my hand on the volume attenuator to fluctuate the pressure of each channel at a different interval. Once I recorded the eight outdoor sounds, I brought the microphone in and recorded feedback tones from each of the eight playback speakers, which are of varying quality, that I used to listen back to the entire mix. Thus, the pure tones heard in the piece are actually the sounds of my home speakers singing to each other.”

I can’t do better than my partner Drew did when I asked him, “What should I say about Twig Harper?” His reply was: “A living national treasure of the American DIY circuit-bent electronic underground, Mr. Harper has been active for decades releasing recordings as a member of seminal outsider duo Natutical Almanac and under his own name. Collaborator with artists from Jandek to Wolf Eyes to Bill Nace, here presents a quadrophonic piece which extrudes his prodigious talent into a 4th dimension.” …he said that. Really! Off the top of his head!  AND IT’S TRUE.

I’m pretty excited to hear the piece by HATAM (IRN) is a sound artist and composer who is highly active in the Berlin experimental scenes. Her biographical information includes this:  uses SuperCollider (a computer music programming language kit) and modular synthesizers and works within LABOUR, the Hacklander \ Hatam duo, solo, as a musical director in theater, and as a specialist DJ. She is co-founder & co-director of N.K.(a performance venue perhaps not unlike the Red Room in Berlin) …and this:   Is not time but a fallible dictate of radical material heteronomy, besieging us in an ocean of chaos and verisimilitude? Her piece is entitled,  “ob-jest.”  Ob-jest is an otherness ceaselessly fleeing in a systematic quest of desire—Julia Kristeva.  The jettisoned object always seemingly within reach but never graspable.

Nathan Corder is probably the most formally trained in this very medium at Mills College and elsewhere…Nathan’s music has been honored and recognized at events such as the International Symposium of New Music (Curitiba, Brazil),  MUSLAB (Mexico City), NYC Electroacoustic Music Festival, N_SEME, Root Signals, the Yarn/Wire Institute, and SEAMUS. In 2014, Nathan was awarded the Allen Strange Memorial award from SEAMUS.  His piece Saturday night is called “Menagerie.”

We have special guests coming to present work on these days: Olivia Block and Special Guest.  I’ll tell you more about these events closer to those dates, but please keep these days in mind because they will be special concerts, indeed!  Friday, contemporary work by these stunning audio artists and Saturday a review of historic German electronic and electroacoustic work entitled Schwingende Elektronen: Selektiver historischer Überblick elektronischer
Musik aus Deutschland presented with our mighty mighty 8.8 speaker array.  REMEMBER THE OSAKA DOME!!  OK, it won’t be … that, but it’s good!

PLEASE JOIN US IN LUXURIATING IN THESE SPECIAL SOUNDS PRESENTED IN A 360 degree pleasure-array. —Martin Schmidt, High Zero Foundation

p.s. the vocabulary used in the descriptions of this...music is meant to be descriptive, not forbidding.  Words like "diffusion" and "electro-acoustic", "fixed media" or "pleasure-array" are invented to help, not hurt. If you want to talk about them...or look them up and talk about how I'm using them "wrong", perhaps....feel free to talk to me at one of these presentations. Language is our servant...not our master.