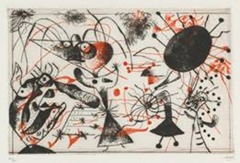 The Baltimore Museum of Art celebrates the 50th anniversary of its oldest collectors’ friends group, the Print, Drawing & Photograph Society (PDPS), with an exhibition highlighting a selection of works that PDPS has helped the BMA acquire over the years. A Golden Anniversary: Celebrating 50 Years of the Print, Drawing & Photograph Society will be organized in two six-month presentations. Each installation will include 20–30 prints, drawings, and artists’ books dating from the late 19th century through present day.

The crown jewel of the group’s celebration is the newest gift to the museum’s collection: Joan Miró’s Plate 6 from the “Black and Red Series.” Other notable artworks in the first rotation include Otto Dix’s Illusion Act (1922), Vija Celmins’s Concentric Bearings, C (1983), Donald Judd’s Untitled (1988), and Armand Séguin’s The Billowing Trees (1893).

“The Baltimore Museum of Art is fortunate to have such a dedicated group of enthusiasts for the museum’s renowned collection of works on paper,” said BMA Dorothy Wagner Wallis Director Christopher Bedford. “I have no doubt their long-standing support is one of the reasons why the BMA holds an extraordinary 65,000 prints, drawings, and photographs dating from the 15th century to the present day.”

PDPS was first established in 1968 as the Baltimore Print Club, an independent organization with the objective to “further the understanding and appreciation of the various media of graphic arts,” and to support the BMA by enhancing public interest in these media. The club changed its name to The Print and Drawing Society and was absorbed into the BMA in 1974. This offered members further educational opportunities, including lectures by renowned scholars and artists, curator-led tours of the BMA, and visits to art collections and museums across the region. In 2005, the club invited the members of the recently disbanded Friends of Photography group to join PDPS, and officially changed its name to the Print, Drawing & Photograph Society.

Many works in the exhibition were acquired with funds raised through the Baltimore Contemporary Print Fair, which PDPS has hosted since 1990. Named the city’s “Best Art Sale” by Baltimore Magazine, this event has brought numerous art dealers from across the country to Baltimore, with the proceeds supporting contemporary acquisitions for the BMA’s collection of works on paper. Over the past half-century, PDPS has helped acquire more than 325 works in the BMA’s collection and has supported special exhibitions, such as Toulouse-Lautrec: Master of the Moulin Rouge in 2004. Today, the BMA’s collection of works on paper comprises roughly 65,000 objects, considered to be one of the most significant holdings in the country.