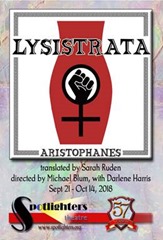 Two to three weeks before the opening of each Mainstage performance of our Season, we will host TOPIC TUESDAY on a Tuesday evening (surprise!).

TOPIC TUESDAY for Lysistrata by Aristophanes, translated by Sarah Ruden, will focus on the content of the work, its social relevance and impact, along with historical reference.  Audience members will hear from a panel including our Directors, Michael Blum and Darlene Harris; or Dramaturg, Paul Gerczak;  educators from local colleges and universities; and translator, Sarah Ruden.

Sarah Ruden was raised in the United Methodist Church and is a “convinced Friend” or Quaker convert. She holds a Ph.D. in Classical Philology from Harvard University and an M.A. from the Johns Hopkins Writing Seminars. She has taught Latin, English, and writing at Harvard, Yale, and the University of Cape Town, and has been a tutor for the South African Education and Environment Project, an education-enrichment nonprofit in Cape Town. She was a scholar in residence for three years at Yale Divinity School and a Guggenheim fellow, and is now a visiting scholar at the University of Pennsylvania. In the fall of 2016, she received the Whiting Creative Nonfiction Grant for her work on Augustine’s Confessions.

She is a poet, translator, essayist, and popularizer of Biblical linguistics. A collection of her poetry, Other Places (William Waterman Publications, 1995, later distributed by HarperCollins) won the South African Central News Agency Literary Award, and her poems appear in The National Review and religious periodicals. She made use of her experience in publishing several book-length translations of pagan literature to write Paul among the People: The Apostle Reinterpreted and Reimagined in His Own Time (Pantheon, 2010). Her translation of Aeschylus’ Oresteia is part of The Greek Plays, a Modern Library Collection (2016). The Face of Water: A Translator on Beauty and Meaning in the Bible (Pantheon) and Augustine’s Confessions: A New Translation (The Modern Library) both appeared in early 2017. She has begun a new translation of the Gospels for The Modern Library, taking into account linguistic, literary, and historical research that has been poorly represented in standard translations.

Join us for this free event, and gain insight into the show, before you come and see Spotlighters’ take on a 2400 year old classic!