AVAM’S Mega-Exhibition Opens 10/6 on Parenting: An Art without a Manual 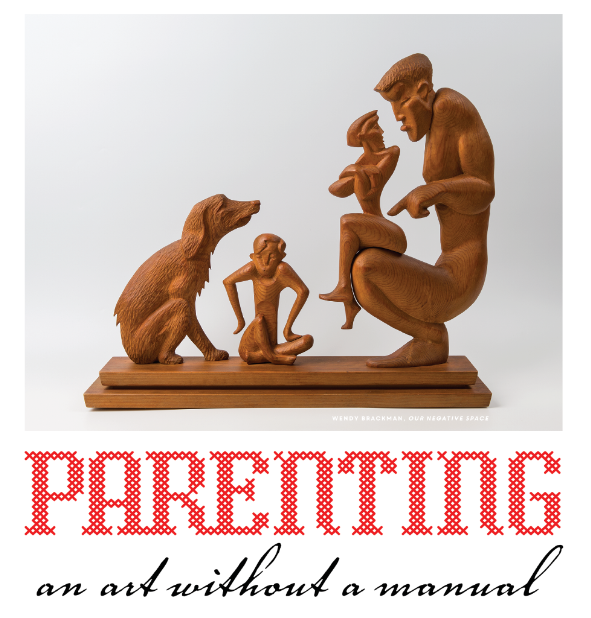 Visitors to The American Visionary Art Museum's newest exhibition, "PARENTING: An Art Without a Manual," will pass beneath an arch emblazoned with the comic warning, "Parenthood — the scariest 'hood you'll ever go through."

For nearly a year, The American Visionary Art Museum (AVAM) will focus public attention on what might be humanity's most essential performance art — the intuitive, transformative, and complex art of parenting. AVAM's upcoming exhibition showcases works by 36 artists, created out of every conceivable medium, to best express their own personal life experience of parenting and being parented — be it good, bad, horrific, and/or sublime, alongside revelations from the latest scientific research, globally sourced wisdoms, and fun.

Parents, we've all had them. Even if they were mere transient biological influences on our lives, predatory horrors, or the embodied essence of goodness and loving kindness, parents and parental surrogates, act like most of humankind's other supremely powerful influencers — religion, sex, food, government, money — each within itself neither intrinsically good nor bad, but rather exist as exponential magnifiers of intention and force.

Included in this lively and wholly honest contemplation of parenting will be an overview of historic and traditional patterns of parenting, its transcultural practice, as well as expert futurist projections regarding the swiftly evolving changes in parenting in an era of increased capacity for bioengineered baby design and robotics. Even trans species animal parenting — with photo documentation of real-life surprisingly loving animal adoptions outside of their respective species — will be included.

Next to artist Alan Christian's life-sized sculptural torsos of mother, father, and child, made entirely from wooden piano keys, will be a banner declaring, "Having children makes you no more a parent than having a piano makes you a pianist." - Michael Levine.

A rare public showing of an original Kahlil Gibran drawing created for his legendary book, The Prophet, will accompany a floor-to-ceiling presentation of Gibran's haunting poem that begins, "Your children are not your children..."

Orphans
In an exquisite testimony to the need to counter extreme loneliness, the orphaned in his childhood, Harvard-schooled businessman Morton Bartlett, created 16 life-like dolls from his own plaster casts, acquiring in private the additional skills to design, knit and sew their bespoke wardrobes, all to tenderly pose them in life-like scenarios to photograph. His never before seen "Day Dreaming Girl" will premiere in this exhibition.
Instructive wall text infused with all the latest insights from neuroscience and behavioral studies will stand side by side with ancient and cross cultural parenting wisdom, good advice, and humor — the unifying glue of many families. Comedian Rita Rudner quipped on pregnancy, "Life is tough enough without having someone kick you from the inside."

Zero to Five
Accompanying famed visionary artist Alex Grey's anatomic images of gestation, will be pointers helpful to both prospective and new parents that seek to underscore the lifelong impact on the child of parental behaviors, particularly over that most crucial period from conception to early childhood known as "Zero to Five." The exhibition and its programming have harnessed the participation of some of the world's leading experts on child-parent attachment and well-being, including Dan Seigel, MD, Heather Berlin, MD, and Dr. Alicia Lieberman. Lieberman's Simms Mann Institute video, "Ghosts and Angels in The Nursery," will play for visitors within the gallery theater.

Refugee Parents
The latest statistics on the growing numbers of families worldwide who are radically challenged to parent in the toughest of refugee and diaspora situations, will be compassionately presented. The role that extreme stress plays in generating cortisol that directly and detrimentally interferes with essential brain development and function in infants and toddlers will be shared in clear language and punctuated by the yarn paintings of Francisco Loza.

The Father-Daughter Relationship
Two spectacular exhibition features come from a sewing collective of older women reflecting on their individual experiences with their dads. Inspired by the vision of artist Wendy Brackman, they worked side-by-side to deconstruct hundreds of vintage colorful ties, one work resulting in a 9 ft.+ giant tie, "Big Daddy," and the other, "Ties That Bind," a complex, visually stunning, 96-hexagonal quilt assemblage sculpture. As the group sewed through the upstate New York winter and spring, six-word impressions of their dads were gathered, such as, "He wanted sons, got me instead."

Losing a Parent
A 72-year old artist, Bobby Adams, has created a life-sized tableau depicting his abusive father, leather belt at the ready, and his beloved and sensitive schoolteacher mom, who took her life and whose loss still brings Adams to tears.
We also will premiere the newest work, a giant painting, that includes excerpts from his mother's suicide note, created by a Baltimore-based visionary artist, Chris Wilson. Wilson was still a young man whose life was forever changed when, as a teen, he intervened to prevent his beloved mother from being violated by a DC police officer.

Parenting a Child with Disabilities
An exquisitely tender black and white photo documentation of his only child Sharon — a daughter born with multiple disabilities — chronicles her birth and life right up into her thirties, nurtured and lovingly noted by single dad Leon Borenzstein. His work reminds us of the many parents who have children who will never outgrow the need for hands-on support and care, even as they themselves grow old and may require assistance.

Surrogate Parents
From an artist son of a Mafia crime boss, to the visual testimony of a teenage girl whose parents were lost to the early days of the AIDS epidemic and was then raised by her cherished only parent, her grandmother, we herein sing praise of surrogates, brave foster and adoptive parents of all stripe, whose loving care transcends biology, as well as those teachers who so often step nobly into the parental abyss to undo broken self-esteem. As Truman Capote concluded in "Breakfast at Tiffany's, "Anyone who ever gave you confidence, you owe them a lot."

Secrets Begin within Families
Once again, AVAM partners with Frank Warren to display his selection of anonymous, exhibition-themed, PostSecret project entries. "Secrets begin within families," Warren observes. His parenting and family related secret revelations, fueled by their author's anonymity, give a visceral insight into the complex nature of parent-child relationships.

Forgiveness
This is an exhibition that aims to guide the visitor of any age to better understand parenting as one of the key, most powerful of influential forces known to humankind. The hope of this exhibition is to deepen collective understanding of the challenges and importance of parenting and awaken the freeing power of forgiveness for both our parent and child selves.

Museum director and curator of "Parenting: An Art Without A Manual" Rebecca Alban Hoffberger states, "Most of us are children of some version of Homer and Marge Simpson — the product of flawed human beings who nonetheless managed to give us some real glimpse of beautifully unconditional love. Parenting is intrinsically a truly democratic art, as even the poorest and least formally educated parents among us might excel at the wise care and loving nurture of their children in a way that might elude some of our wealthiest and formally best educated parents." In summation, the poet philosopher George Santayana wrote, "The family is one of nature's masterpieces." A special thanks to assistant and co-curator Anna Gulyavskaya.

About the American Visionary Art Museum (AVAM) is a Congressionally-designated national museum and education center dedicated to intuitive, self-taught artistry. It champions the role intuition plays in creative invention and innovation of all sort — be it art, science, engineering, humor or philosophy, and especially in compassionate acts of social justice.