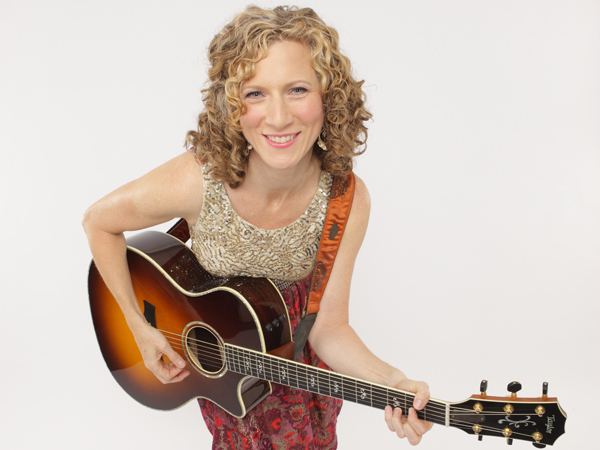 WHEN: SATURDAY, JULY 21, 2018, 2 PM
WHERE: WEINBERG CENTER FOR THE ARTS, 20 West Patrick Street, FREDERICK
TICKETS: Tickets, which are free of charge, are required for admission.
TO RESERVE TICKETS: visit the Weinberg Center website.

"The Adele of the preschool crowd" -- The New York Times

A true pioneer in children's music, beloved by generations of children and parents for over twenty years, the legendary Laurie Berkner will, of course, perform her irresistibly fun "Monster Boogie" song at this concert, along with such well-loved hits as "Bumblebee (Buzz Buzz)," "Victor Vito," "We Are The Dinosaurs," and "Pig on Her Head." Laurie will showcase many fan favorites, including an array of tunes that encourage kids and grownups alike to get up and dance. Dancers from C & C Dance Company will be on hand to perform a choreographed number set to an EDM version of "Monster Boogie" from Laurie's new album, Laurie Berkner: The Dance Remixes. Kids should plan to bring their dancing shoes and a stuffed animal (for their heads).

At her solo shows, in addition to familiar hits, Laurie Berkner performs songs that don't always fit with a full-band performance: tunes with simpler arrangements, hand motions, and a cappella singing, like "Bottle Caps," "One Seed," "Telephone," and "Drive My Car."

After the show, Laurie will sign copies of Monster Boogie at a book signing sponsored by downtown Frederick's independent bookstore, Curious Iguana.

Says Laurie Berkner, "When we’re kids, monsters are scary things. But we all have feelings inside of ourselves that are kind of monstrous. We all want to be loud sometimes (even just to be heard), or get caught up in our big, angry feelings. I wrote the words to this song (that have now been so wonderfully illustrated by Ben Clanton) so that kids could have the opportunity to 'BE the monster' and enjoy it, even revel in it, in a safe way, and still feel loved."

Her secret? Laurie’s shows are interactive throughout; her songs get the kids (and adults) on their feet to sing, clap, and dance along. She keeps even the youngest audience members fully engaged with dynamic expressions of musical joy in active songs like "I'm Gonna Catch You" and "Rocketship Run," and gives everyone a chance to catch their breath between high-energy moments by including quieter interludes featuring songs such as Laurie's classic "Moon Moon Moon." Laurie displays an instinctive understanding of children's natural rhythms and energy in her shows, which keeps kids enraptured and brings parents happily along for the ride.

Laurie Berkner was the first artist to ever appear in music videos on Nick Jr. and was featured in nearly all the episodes of the channel's Jack's Big Music Show. Laurie's music videos now appear regularly on NBCUniversal's Universal Kids channel, and she is a familiar presence on SiriusXM's Kids Place Live. Laurie has released twelve award-winning albums, including her most recent, Laurie Berkner: The Dance Remixes.

Simon & Schuster Books for Young Readers is publishing a series of three picture books with Laurie Berkner. The first, We Are the Dinosaurs, illustrated by Ben Clanton, was released in March 2017, to coincide with the 20th anniversary of the release of Laurie's "We Are the Dinosaurs" song on her very first album, Whaddaya Think of That? November 2017 brought the release of Pillowland, based on Laurie's beloved song by that name, with beautiful illustrations by Camille Garoche. July 2018 will see the publication of Monster Boogie, illustrated by Ben Clanton.

A former preschool music teacher by day and indie rocker by night, Laurie Berkner started selling her music two decades ago out of her living room on her own label, Two Tomatoes Records. Laurie has received tremendous critical acclaim. Time Magazine lauded Laurie as "a kind of sippy-cup Sheryl Crow ... Berkner inhabits a kid's curious perspective in her lyrics and pens folk-pop melodies that bear repeated -- very repeated -- listenings." The Wall Street Journal called Laurie "one of the most popular children's performers in America ... her music is distinctive because it speaks to kids without talking down to them, charming youngsters without boring grown-ups."

Watch Laurie Berkner in action on her Youtube channel HERE