The Baltimore Museum of Art (BMA) announces today that its Board of Trustees approved the acquisition of 23 works of art, including seven purchased in full or in part using proceeds from the auction of recently deaccessioned works. The new acquisitions encompass paintings by Njideka Akunyili Crosby, Odili Donald Odita, Amy Sherald, Jack Whitten, and Lynette Yiadom-Boakye; sculpture by Wangechi Mutu; prints by Enrique Chagoya, Bruce Connor, Yun-Fei Ji, and Adam Pendleton; films by Isaac Julien, and Mary Reid Kelley and Patrick Kelley; textiles by Stephen Towns; and photographs by Harry Callahan, Mary Reid Kelley and Patrick Kelley, Kenji Nakahashi, Wang Qingsong, Chuck Ramirez, Toshio Sasaki, Noh Suntag, and Yoshihiro Tatsuki. Most of these works were acquired through gifts and other funds, and many are the first by the artist to enter the BMA’s collection.

“Museums are entering a new era of heightened consciousness of incomplete histories and biases that must be addressed. In acquiring works by the most significant black and female artists working in the United States, as well as pivotal works from Korea, China, Mexico, and Japan, we hope to not only methodically address previous omissions in our collection but also broaden the canon and historical narrative told through art,” said BMA Dorothy Wagner Wallis Director Christopher Bedford. “By moving toward equitable representation and historical accuracy in our collection, we aspire to become a better reflection of our Baltimore community and lead fruitful dialogue on future museum practices amongst our peers. This group of acquisitions is just the beginning.”

The announcement follows the BMA’s recent decision to deaccession seven works from its contemporary collection through public and private sales with Sotheby’s. In each case, the museum holds other, stronger works by the same artists in its collection. The proceeds from those sales are being used exclusively for the acquisition of works created in 1943 or later, allowing the museum to strengthen and fill gaps within its collection.

Isaac Julien. Baltimore. (2003) Julien’s Baltimore is a surreal, visually lush allegory about race, class, and history. This monumental, three-screen video installation follows a preternatural, cyborg-like young woman and a bearded, older man (played respectively by Vanessa Myrie and Melvin Van Peebles) as they navigate Baltimore and the interiors of The National Great Blacks in Wax Museum (NGBWM), George Peabody Library, and The Walters Art Museum. Julien (British, b. 1960) is a celebrated artist and filmmaker whose work often questions the representation of black subjects in visual culture. Baltimore was co-commissioned by The Contemporary Museum in Baltimore along with The Walters Art Museum in Baltimore and the UK-based FACT (Foundation for Art & Creative Technology), in association with NGBWM, George Peabody Library, and Eyebeam Atelier in New York. It debuted at The Contemporary Museum in 2004. This is the first work by Julien to enter the BMA’s collection, and the only edition of this important artwork in a public American collection. It strengthens the museum’s holdings of media and moving image works by black artists.

In The Body of The Sturgeon, which transports viewers to a fantastic cinematic world with a poetic script drawn from Henry Wadsworth Longfellow’s The Song of Hiawatha and haunting black-and-white sets. The film follows weary sailors at the end of World War II meeting their death aboard a sinking submarine that was inspired by the USS Torsk in Baltimore’s Inner Harbor. Gaudy Night is one of several light boxes that provide a closer look at details of the film, in this case the double-drag that Mary performs. Mary and Patrick have exhibited their work around the world and Mary is the recipient of a 2016 MacArthur Foundation “genius grant.” Both acquisitions are on view at the BMA as part of the Mary Reid Kelley and Patrick Kelly: We Are Ghosts exhibition presented in collaboration with Johns Hopkins University’s Center for Advanced Media Studies through August 19, 2018.

Wangechi Mutu. Water Woman. (2017) Mutu is an artist celebrated internationally for collaged works that transform images of women cut from magazines into vibrant, ferocious figures, as well as compelling sculptures made from a variety of media. Water Woman is a bronze sculpture of a sensuous mermaid, a figure popularized in both Western literature and African cultural narratives. Mutu’s (Kenyan, b. 1972) work complements the museum’s collection with strong holdings in sculpture by Auguste Rodin, Edgar Degas, and Henri Matisse. Water Woman references the tale of a pregnant and beleaguered wife who, to spite her abusive husband, jumps into the sea to drown herself and her unborn child. She magically transforms into a mermaid in a myth that turns tragedy into liberation and empowerment. Deaccession funds allowed the museum to complete this acquisition, which was also made possible through generous gifts from Katherine M. Hardiman and Ellen Dame, as well as the following existing BMA accessions funds:  Fanny B. Thalheimer Memorial Fund, Frederick R. Weisman Contemporary Art Acquisitions Endowment, and Dr. Max Stern Trust Fund.

Amy Sherald. Planes, rockets, and the spaces in between. (2018) Baltimore-based Sherald (American, b. 1973) entered the national spotlight with her masterful portrait of former U.S. First Lady Michelle Obama, igniting a public conversation about the role of portraiture and codes of representation used in images of black Americans. Planes, rockets, and the spaces in between is the first work she painted following the historic commission and signals an exciting departure in her practice as it sees two figures in enlarged scale and outdoor landscape. It is also the first work by Sherald to enter the BMA’s collection and joins a strong and growing collection of contemporary figurative works across media. It is currently on view in the artist’s solo exhibition at the Contemporary Art Museum St. Louis through August 19, 2018.

Jack Whitten. 9.11.01. (2006) Whitten’s monumental meditation and response to 9/11 is the artist’s most significant and broadly humanist political painting in a lifetime of such work. The artist witnessed the attack on the World Trade Center from his studio and incorporated bone fragments and blood, sourced from a butcher shop, as well as ash and molten materials from the site of the tragedy into a composition that includes a pyramid that memorializes the dead. Throughout his five-decade career, Whitten (American, 1939-2018) was recognized as an innovative artist who experimented with materials and techniques. He was awarded a National Medal of Arts from President Barack Obama in 2016 and his work is in numerous prestigious collections including The Museum of Modern Art, The Metropolitan Museum of Art, and the Tate London. The painting is on view at the BMA through the end of July. 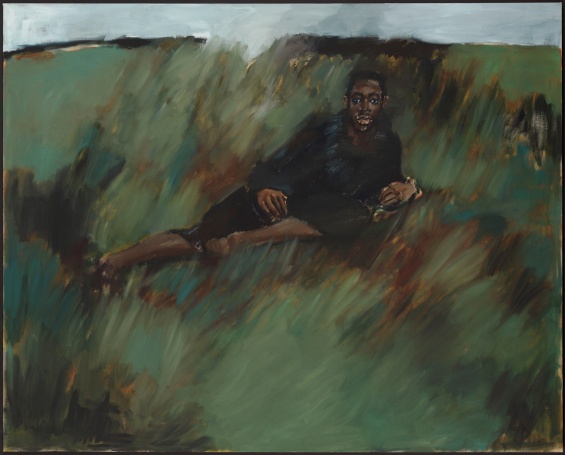 Lynette Yiadom-Boakye. 8am Cadiz. (2017) Yiadom-Boakye is an internationally celebrated artist whose haunting and emotional paintings often evoke a timeless, romantic state of contemplation and beauty. Her paintings feature fictional subjects occupying exterior and interior spaces rendered in subtle color palettes and with expressive paint handling. In 8am Cadiz, a male figure stares out from a lush field with an intent look but relaxed body, as if interrupted from a windswept reverie. This figurative painting is the first by the artist to enter the BMA’s collection. Yiadom-Boakye (British, b. 1977) was the 2012 recipient of the Pinchuk Foundation Future Generation Prize and was short-listed for the 2013 Turner Prize. Her work is included in many collections including the Tate London, The Museum of Modern Art, San Francisco Museum of Modern Art, and The Smithsonian National Museum of African Art in Washington, DC.

Njideka Akunyili Crosby. Dwell: Aso Ebi. (2017) Nigerian-born Crosby’s mixed-media paintings on paper reflect a cultural heritage that encompasses African, European, and American influences. Dwell: Aso Ebi details Crosby’s self-portrait in a Nigerian home, and weaves in highly personal family imagery, photographic transfers from Nigerian society magazines, and fabrics produced for ceremonies like weddings and political campaigns. Her technical virtuosity and deeply considered observations about art and life make her paintings testaments to the outcomes of cultural confluence. The piece debuted at the BMA as part of its exhibition of Crosby’s work in fall 2017 and is the first work by the artist to enter the museum’s collection. Crosby (Nigerian, b. 1983) is the recipient of numerous awards, including a 2017 MacArthur Foundation “genius grant,” and her work is in the collections of museums around the world.  This work was purchased as the gift of BMA Trustee Nancy L. Dorman and her husband Stanley Mazaroff. 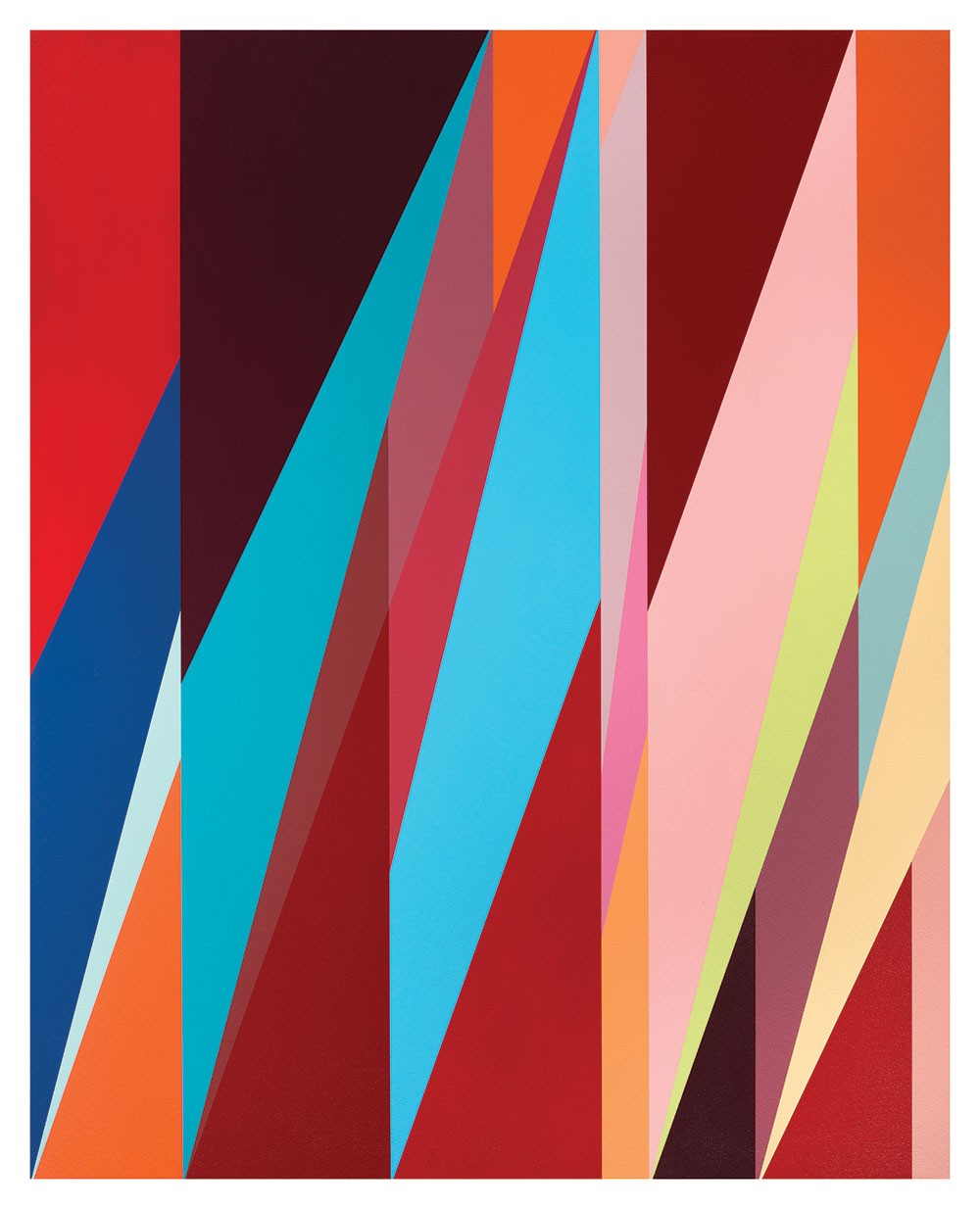 Odili Donald Odita. Adorn. (2018) Odita creates grandly scaled paintings and murals made up of brilliant hues that interlock in hard-edged geometric forms. Adorn is a stunning example of Odita’s most recent work. The vertical painting on wood features horizontal bands of vivid color organized asymmetrically across a center line, while the wood veneer provides a contrasting pattern of vertical grooves that give the composition a shimmering effect. The work builds on the BMA’s holdings of geometric abstraction and color field paintings. Odita (American, b. Nigeria 1966) was featured prominently in the 52nd Venice Biennale exhibition curated by Robert Storr and has created several large-scale wall installations, including one for The United States Mission to the United Nations in New York. This work is a promised gift of the Joyner/Giuffrida Collection.