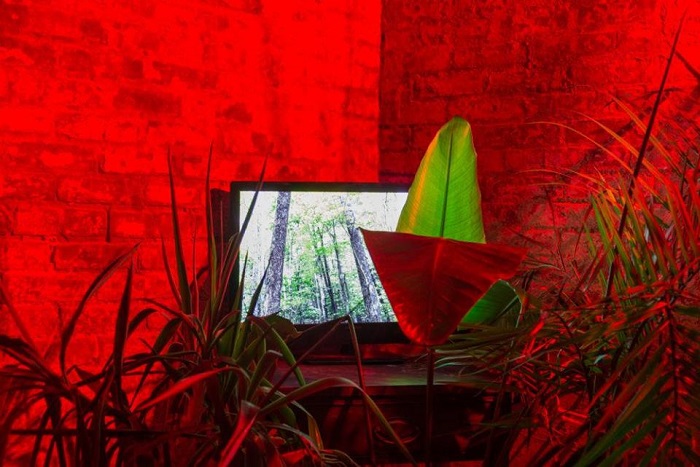 3 unique and distinct solo performances at the Red Room – offering a deep dive into the lush, cryptic inner worlds of electronic, electromagnetic and mechanical sounds.

Featuring JIN SANGTAE one of the pivotal musicians of the Seoul South Korean electronic and improvised music scene, in a rare US concert!

We’re very excited to present, from South Korea, the hard drive, electronic musician JIN SANGTAE, who’s been involved in the highly influential dotolim and Relay creative music series in South Korea, and works with musicians like Ryu Hankil, Choi Joonyoung, Joe Foster, Tim Olive, Taku Unami, Kevin Parks and more! Born in 1975 in Seoul, Korea, Jin Sangtae performs with non-musical objects collected through his experience, projected into instruments, and then re-organised into the space. He uses hard drives and several materials that can be connected as a main instruments, and he also plays laptops, radios, car horns and electronics. He’s been uploading online his composition ‘Year‘ via mobile phone everyday since 2015. He founded ‘dotolim‘(a small space for improvised music) and has been organising the ‘dotolim concert series’ since 2008 as well as the festival ‘dotolimpic‘ in 2012, 2013 and 2017. http://popmusic25.com

ERICK ANTONIO BENITEZ / PÁJARO DE LA SELVA) is a Salvadorian-American multidisciplinary artist, sound alchemist, curator and organizer based in Baltimore MD. His music is a thread of improvised compositions creating a blend of sonic landscapes using field recordings, processed instruments, samples, and sound design. Often his sound compositions are performed along with visual projections that are captured from various site-specific natural landscapes that he has traveled in Latin AmericaMD. He received his BFA from the Maryland Institute College of Art and has shown work in DC, Maryland, New York, Colorado, Barcelona (ES), Santa Marta (CO), Vicuña (CL) and Timisoara (RO). Most recently Pajaro (Benitez) was nominated as 2018 Baker Artist Award Finalist, Sondheim Artscape Prize 2018 Finalist and awarded a residency at The Studios at MASS MoCA. https://soundcloud.com/pajarodelaselva

DAN MALINSKY recently transplanted to Baltimore from Pittsburgh. Malinsky is an improviser and composer of electro-acoustic music, with varying instrumentation: his latest performances have been comprised of audio feedback, electro-magnetic interference (from mobile telephones or other electronic devices), and amplified object manipulation. www.dmalinsky.info