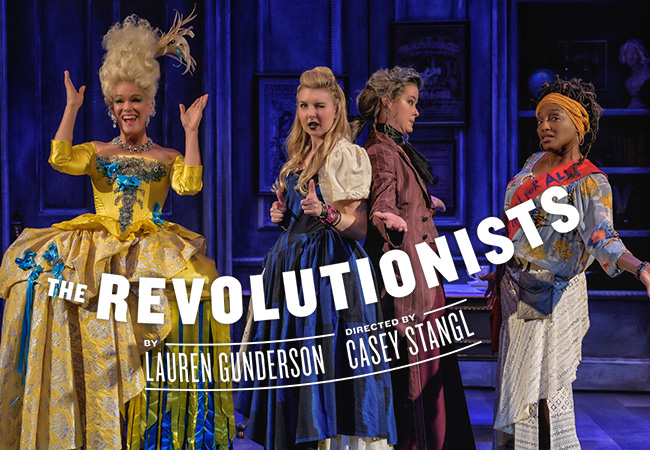 Fresh, funny and as timely as ever, The Revolutionists is a spirited, race-against-the-guillotine thrill-ride that celebrates the powerful bond among women and the capacity of art and expression to create change.

Screening: Farewell My Queen
Tuesday, December 12
The Revolutionists Set Designer Daniel Ettinger presents a screening at the Parkway Theatre of this passionate and visually stunning French drama about Marie Antoinette, followed by a discussion.

Girls' Night Out
Fridays, December 15-January 5
Escape to the theatre for a fabulously fun and memorable night out with your BFFs, featuring 4 tickets to the show, a plate of delectable LB Bakery macarons and a bottle of house wine to share!

Tenets of Comedy
Sunday, December 17
Laugh your way from The Revolutionists to this one-of-a-kind workshop for adults, taught by Resident Company member Bruce Nelson. With a focus on physical comedy, students explore using their actor's tools to create humor onstage—from individual comedic bits to the fundamentals of making a joke come hilariously to life.  LEARN MORE

Off-Stage Stories: Today's Artistic Revolutionists
For centuries, women have used the power of the pen, the paintbrush and the performance stage to demand their voices be heard on important political and social issues. So who are some of today's artistic revolutionists?  READ MORE