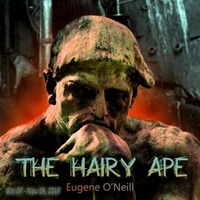 The Hairy Ape is a 1922 expressionist play by American playwright Eugene O'Neill. It is about a brutish, unthinking laborer known as Yank, the antagonist of the play, as he searches for a sense of belonging in a world controlled by the rich. At first, Yank feels secure as he stokes the engines of an ocean liner, and is highly confident in his physical power over the ship's engines and his men.

​However, when the rich daughter of an industrialist in the steel business refers to him as a "filthy beast," Yank undergoes a crisis of identity and so, starts his mental and physical deterioration. He leaves the ship and wanders into Manhattan, only to find he does not belong anywhere—neither with the socialites on Fifth Avenue, nor with the labor organizers on the waterfront. In a fight for social belonging, Yank's mental state disintegrates to animalistic, and in the end Yank finds himself at the zoo staring at the Great Ape.

The Hairy Ape is a portrayal of the impact industrialization and social class has on the dynamic character Yank.

No one under age 13 will be admitted without an accompanying Adult.