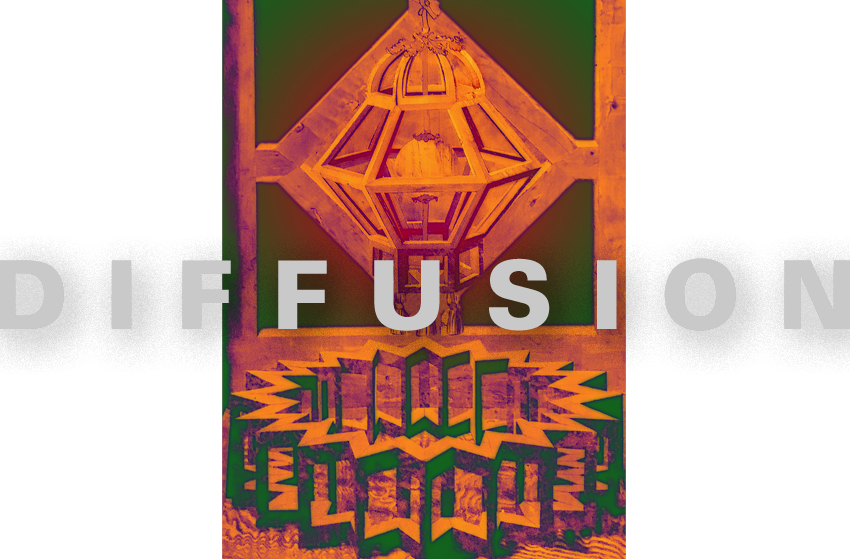 WHEN: Friday, October 20th at 7:30 pm
WHERE: The Red Room at Normals Books and Records, 425 E 31st Street, Baltimore
TICKETS: advanced tickets are available via www.redroom.org

WHEN: SATURDAY, NOVEMBER 18th
WHERE: 2640 St. Paul Street, Baltimore
Classic masterworks of Musique Concrete diffused by Francois Bonnet, artistic director of the Groupe de Recherches Musicales in Paris. InaGRM.
Pieces by Francois BAYLE, Bernard PARMEGIANI, Beatriz FEYRARA and others. If you come to no other event in this festival, DO come to this.

WHEN: SATURDAY DECEMBER 9th.
WHERE: At the Red Room at Normals Books and Records, 425 E 31st Street, Baltimore
MATMOS and Jeff CAREY
Jeff Carey’s “Speaker Quartet II” and Matmos’ live diffusion of their last album on Thrill Jockey, “Ultimate Care II” using only the sounds of their washing machine.  No washing machine present.

There are advance tickets available for all these events, seating is limited as a result of seat placement for ideal listening!

At the risk of telling you things you already know (and if you know all about it, please skip to the schedule at the bottom of this missive), here’s a little historical background information about the kind of music presented in this festival. I should include the caveat that possibly some participants in the festival might disagree with some of the ideas put forth here.

There are many terms for this music, and this music, like all music blessedly, resists easy definition, and slips and melts into music with other names. That said, some terms commonly used are “electro acoustic”, “musique concrete”, “sound-art” “sound music” or even, non-derogatorily “noise music.”  French academics call it “Acousmatic”.  There are many other names in use, desperately grabbing at language in an attempt to summarize the motivations and parameters for making this music, though I’m NOT an academic, so I will use these terms loosely, wrongly, some might say…correctly.

To save you a click, here are the beginnings of the Wikipedia entries for “electro acoustic music” and “musique concrete”:

Electroacoustic music originates around the middle of the 20th century, following the incorporation of electric sound production into compositional practice.
“The initial developments in electroacoustic music composition to fixed media during the 20th century are associated with the activities of the Groupe de Recherches Musicales at the ORTF in Paris, the home of musique concrète, the Nordwestdeutscher Rundfunk (NWDR) studio in Cologne, where the focus was on the composition of elektronische Musik, and the Columbia-Princeton Electronic Music Center in New York City, where tape music, electronic music, and computer music were all explored…”

Musique concrète  is a form of experimental music that exploits acousmatic listening, meaning sound identities can often be intentionally obscured or appear unconnected to their source cause. It can feature sounds derived from recordings of the natural environment, musical instruments, the human voice, as well as those created using synthesizers and computer-based digital signal processing.

Compositions in this idiom are not restricted to the normal musical rules of melody, harmony, rhythm, metre, and so on. Originally contrasted with "pure" elektronische Musik (based solely on the production and manipulation of electronically produced sounds rather than recorded sounds), the theoretical basis of musique concrète as a compositional practice was developed by Pierre Schaeffer, beginning in the early 1940s. From the late 1960s onward, and particularity in France, the term acousmatic music (musique acousmatique) started to be used in reference to fixed media compositions that utilized both musique concrète based techniques and live sound spatialisation. (More about this in relation to DIFFUSION Festival later!)

Some more ideas, brutally excerpted by me, without permission, here from Christopher Cox:

“For over the past quarter century, ‘sound’ has replaced ‘music’ as an object of cultural fascination. Not only has ‘sound art’ become a prominent field of practice and exhibition, embraced by museums and galleries across the globe, the academy has also witnessed an explosion of interest in auditory history and anthropology led by social scientists who have turned their attention to sound as a marker of temporal and cultural difference. Within the field of music itself, composers, producers, and improvisers have become increasing attracted to the broader sonic domains against which music has always defined itself: noise, silence and non-musical sound.

It is common to think of music as a subcategory of sound. According to this view, sound encompasses the entire domain of auditory phenomena, while music is a narrower domain delimited by some selection and organization of sounds…”

I personally believe that this shift was pushed forward by two things, technological advances in recording and playback of sounds and the invention of musique concrete, both in the more academic form and in it’s more accessible form in “pop” music.

I can’t think of any better way to illustrate these ideas than to direct you to an amazing work of audio-documentary created by (High Zero alum) Jon “Wobbly” Leidecker, hosted by the Museum of Contemporary Art - Barcelona. It’s ONLY SEVEN HOURS LONG!

Ha. But, well, though listening to the whole thing is a very good thing to do, in the context of our festival, I think you should start with episode 3, “The Approach”.  His thesis is mostly related to sampling, broadly,  “appropriative collage” in music, though he explores a lot of material related to what I’m discussing here. The website is a little difficult to navigate…to listen, you want the one/s called
CURATORIAL  VARIATIONS #3 The Approach
…then the player for that show appears in the upper right part of the screen…they are all downloadable. If you listen to them all you get a certificate in Sound Studies from Wobbly University...tell him I sent you.

Here’s the weblink, and a picture of the screen, so you know what it looks like when you are in the right place. 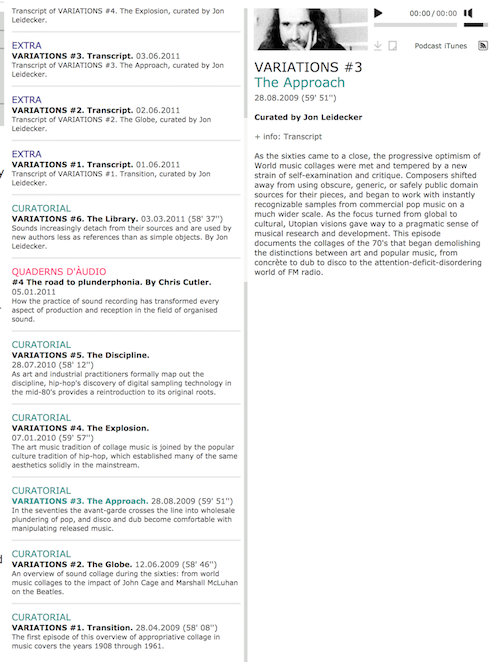