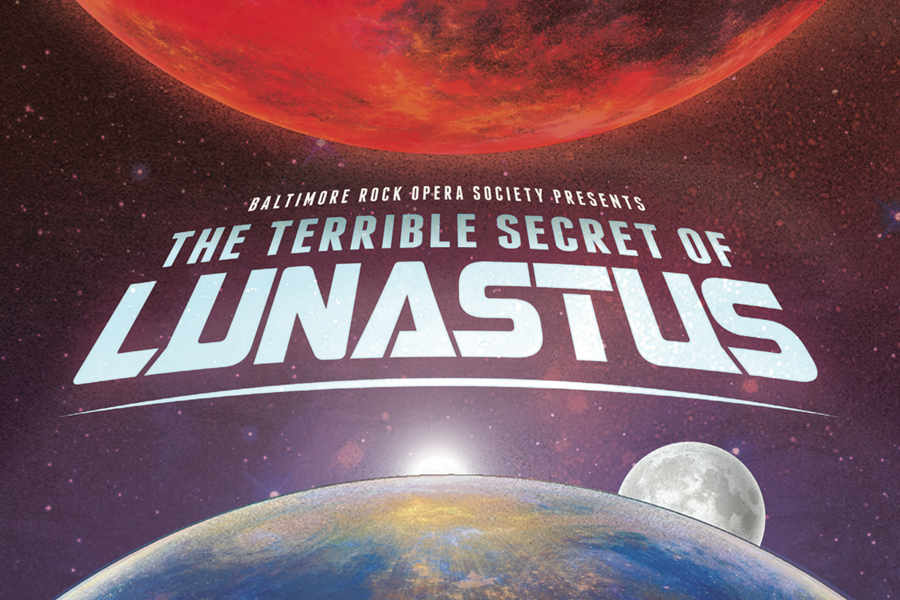 THE TERRIBLE SECRET OF LUNASTUS

WHEN: September 15 - 17, 21 - 24, 28 - October 1, October 5 - 8
All showtimes are 8:00pm with doors for Supporter Level tickets at 7:30pm and General Admission at 7:40pm.
WHERE: Zion Lutheran Church, 400 E Lexington St., Baltimore
TICKETS: General Admission Tickets: $20. We also have two levels of BROS Supporter tickets with sweet perks because we rely on YOU to keep bringing epic rock operas to life in Baltimore. We also have discount tickets available! Read all about the options on our ticketing page!
SNAG YOUR TICKETS NOW!

ABOUT THE SHOW:
The Terrible Secret of Lunastus is a zany comedy-action romp through the outers of space! The Moon is falling from orbit and on the eve of the Earth’s destruction four astronauts, accompanied by their stupid robot, Android, depart for the planet Lunastus to assess its suitability as a new home for the human race. The creatures they discover there will make them question their free will… and fear for their lives.

The Terrible Secret of Lunastus is the third original rock opera written and performed by the Baltimore Rock Opera Society. It originally debuted in 2011 as a part of the BROS Double Feature at the Autograph Playhouse on 25th Street. Hopefully by this point those of you who saw the 2011 show will have forgotten what Lunastus’ terrible secret was!

We have a variety of ticket prices and perk packages available for all wallet sizes. Supporter seats will be best in house and come with lots of other cool goodies and drinks.