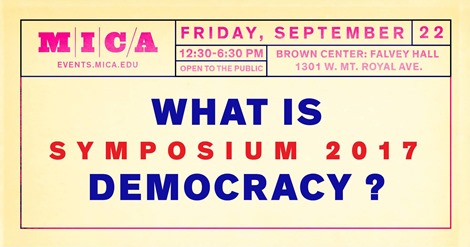 WHEN: September 17-22
WHERE: MICA’s Falvey Hall, 1301 W. Mount Royal Ave., Baltimore
ADMISSION: All events are free and open to the public . Seating is first-come, first-served.

MSNBC’s Joy-Ann Reid will headline the opening panel of this year’s programming around Constitution Day. The free, two-day symposium sponsored by the Maryland Institute College of Art (MICA) commemorates the holiday (September 17) with panels and commentary on contemporary issues in politics, government, civic engagement and activism.

This year’s opening forum will explore the emerging crisis that democratic institutions and government are facing due to the advent of the Trump administration. How can the country consider these issues at a time when the president, his advisors, and majority leaders in the Senate and Congress are testing the public’s faith in government and its ability to represent their best interests?

"We are living in exceptional political times, where, many argue, the basic and central institutions of our democracy are threatened—by the president himself,” said Constitution Day organizer and MICA Humanistic Studies faculty member Firmin DeBrabander.

He added: “How worrisome are Trump’s perceived attacks? What shall we make of them, and how shall we respond? How do they measure up in the scope of history, here and beyond? For, some have exclaimed Trump's attacks are the first signs of tyranny. Is this tyranny, and if so, how will democracy survive?" Alongside Reid, the panel will also include “revolutionary” artist Dread Scott (right)and Kenneth Ledford, chair of the department of history at Case Western University. WYPR Midday host Tom Hall will moderate. The first day of Constitution Day programming is co-sponsored by the American Civil Liberties Union of Maryland (ACLU-MD). A second symposium, entitled What Is Democracy? and scheduled for Friday, Sept. 22, will dive deeper into the complex and often problematic issue of defining democracy, and how civic action, education and art factor into the conversation. The day culminates in a conversation between artist Mel Chin (left) and Lester K. Spence, associate professor of political science and Africana studies at Johns Hopkins University, in which they will discuss the role of art in a democratic society and the personal role that citizens play in defining democracy.

"We are questioning our assumptions and our understanding of democracy within the United States, probing deeper into the role of the everyday citizen in defining the very concept of democracy,” said Colette Vesey-Cullors, MICA’s chair of Photography and organizer of the What is Democracy? symposium.

“Given the current political climate, many individuals and groups find themselves at a crossroads with regards to race, immigration, education and personal responsibility, amongst other issues. We must ask ourselves whether our actions shape our democracy or does our democracy shape our actions?”

Below is a full schedule of this year’s Constitution Day events on Tuesday., Sept. 19, and Friday, Sept. 22.

Joy-Ann Reid, MSNBC correspondent and author, will headline the panel that will also include “revolutionary” artist Dread Scott and Kenneth Ledford, chair of the department of history at Case Western University. The panel will discuss the current state of democracy in America, and how President Trump’s administration is functioning (or if not) as a representation of American democracy. WYPR Maryland Midday host Tom Hall will moderate. Tuesday, Sept. 19, 7 – 9 p.m.

Artist Mel Chin and Lester K. Spence, associate professor of political science and Africana studies at Johns Hopkins University, discuss the role of art in a democratic society and the personal role of citizens in defining democracy. Friday, Sept. 22, 5 p.m.

Established in 2005, Constitution Day continues the College’s tradition of leadership in raising and exploring important political issues. This year’s Constitution Day officially launches a new College-wide initiative MICA Making Democracy, which advances MICA’s core values in response to changes in the cultural and political landscape. Events surrounding themes of democratic practice, civic action, freedom of expression, immigration, equity, citizenship, information literacy, the public good, and the role of art and design in moments of change and upheaval will be supported through this initiative.

About the Constitution Day participants:

Khadija Nia Adell
Khadija Nia Adell is gallery assistant at Galerie Myrtis and program coordinator for the North Avenue Knowledge Exchange, a free community-based education programming series funded in part by the National Endowment for the Arts, in partnership with MICA, Station North Arts and Entertainment District and Red Emma’s Bookstore and Coffeehouse. Adell has a B.F.A. in interdisciplinary sculpture and art history from MICA.

Mel Chin
Mel Chin was born in Houston, Texas, in 1951. Chin is known for the broad range of approaches in his art, including work situated in unlikely places, such as destroyed homes, toxic landfills and popular television. He developed Revival Field (1989-ongoing), a project that has been a pioneer in the field of “green remediation,” the use of plants to remove toxic, heavy metals from the soil. From 1995-1998 he formed the collective, the GALA Committee that produced In the Name of the Place, a conceptual public art project conducted on American prime-time television.

Graham Coreil-Allen
Graham Coreil-Allen is a Baltimore-based public artist and organizer working to make cities more inclusive and livable through public art, radical walking tours and civic engagement. He received a B.A. from the New College of Florida in Sarasota, and an M.F.A. from MICA’s Mount Royal School of Art in Baltimore. He has created public projects and programs for the Baltimore Office of Promotion and Arts, Deitch/Creative Time Art Parade, Eyebeam, openhouseNY, Washington Project for the Arts, Arlington Art Center, Artscape and ICA Baltimore, among others.

Dorcas R. Gilmore
Dorcas Gilmore is a founding principal of Gilmore Khandhar, LLC, and a founding board member of Baltimore Activating Solidarity Economies (BASE). She is an advocate and consultant on issues of leadership, racial equity and community lawyering. She has represented a range of local and national nonprofit organizations, small businesses and coalitions to advance racial, economic, and environmental justice through transactional strategies, administrative advocacy and litigation.

Tom Hall
Tom Hall is a broadcaster, performer, lecturer, writer and educator. He is host of Midday on Baltimore NPR-affiliate WYPR Radio. As the Music Director of the Baltimore Choral Arts Society, he has collaborated with many of Maryland's leading arts organizations, and has lectured at the Peabody Conservatory, the Johns Hopkins University and Morgan State University.

Kenneth Ledford
Professor Kenneth Ledford is Chair of the Department of History at Case Western Reserve University and holds appointments both in the Department of History and the School of Law. He teaches German history, European legal history, history of European legal professions, historical methods, and the history of European Union law. He is author of From General Estate to Special Interest: German Lawyers 1878-1933 (Cambridge University Press). Ledford received his B.A. with honors in history and J. D. with honors from the University of North Carolina, Chapel Hill, and received his M.A. and Ph.D. in modern German and European history from The Johns Hopkins University.

Joseph Manko
Joseph Manko is the principal at Liberty Elementary School. Manko is a Fulbright fellow who has taught at Towson University and Johns Hopkins. In 2014, Manko was chosen as one of 17 transformational principals in Baltimore and prestigious designation given for outstanding leadership within Baltimore City Public Schools. Manko holds a B.A. in history and political science from the University of California Los Angeles, and an M.A. in teaching and M.S. in education from The John Hopkins University. He is currently working on his Ph.D. at the University of Maryland.

Joy-Ann Reid
Joy-Ann Reid is a national correspondent for MSNBC and the author of the book Fracture: Barack Obama, the Clintons and the Racial Divide (William Morrow). During the 2004 presidential campaign, Reid served as the Florida deputy communications director for the 527 America Coming Together initiative, and was a press aide in the final stretch of President Barack Obama's Florida campaign in 2008. Reid's columns and articles have appeared in The New York Times, Miami Herald, South Florida Sun-Sentinel, South Florida Times and Salon. Reid graduated from Harvard University in 1991 with a concentration in film, and is a 2003 Knight Center for Specialized Journalism fellow. She currently resides in Brooklyn with her husband and family.

Gianna Rodriguez
Gianna Rodriguez is a visual and performing artist living in Baltimore. She is the founder and executive director of Baltimore Youth Arts, the youth initiative of the Blank Page Project, an artist-led project that provides arts programming to youth and adults who are involved in the juvenile and criminal justice systems. Rodriguez graduated from Hampshire College in 2007 with a B.A. in liberal arts, and from Goddard College in 2015 with an M.A. in education. She has received fellowships from the Robert W. Deutsch Foundation and the Open Society Institute - Baltimore.

Amy Scott
Amy Scott is Marketplace’s senior education correspondent. In addition to covering the K-12 and higher education beats, she files general business and economic stories for Marketplace programs and marketplace.org, drawing from her experience covering finance in New York. Scott has a B.A. in history from Grinnell College and an M.A. in journalism from the University of California, Berkeley, where she studied documentary filmmaking.

Dread Scott
Dread Scott makes revolutionary art to propel history forward. His work has been included in recent exhibitions at MoMA PS1, Walker Art Center, Brooklyn Museum and The Whitney Museum of American Art. He is a recipient of grants from the Creative Capital Foundation, the MAP Fund and the Pollock Krasner Foundation, as well as a Socially Engaged Artists Fellowship from A Blade of Grass Foundation. His work is in the permanent collections of the Whitney Museum, Brooklyn Museum, and the Akron Art Museum.

Lester Spence
Lester Spence is an Associate Professor of Political Science and Africana Studies, and is one of two co-directors of the Center for Africana Studies at The Johns Hopkins University. Spence has published two books, Stare in the Darkness: Hip-hop and the Limits of Black Politics and Knocking the Hustle: Against the Neoliberal Turn in Black Politics. He is currently at work on two book length projects examining the contemporary AIDS crisis in black communities, and the growing role of police in major American cities.

Kalima Young
Kalima Young is a lecturer at Towson University and Ph.D. candidate in American studies at the University of Maryland, College Park. Her research explores what it means in contemporary America to be Black and to be the subject of and witness to ongoing violence against Black bodies. Young wrote, produced and directed two feature length films: Grace Haven (2006) and Lessons Learned (2009). Young is on the leadership team for the FORCE: Upsetting Rape Culture’s Monument Quilt Project, a collection of stories of survivors of rape and sexual abuse