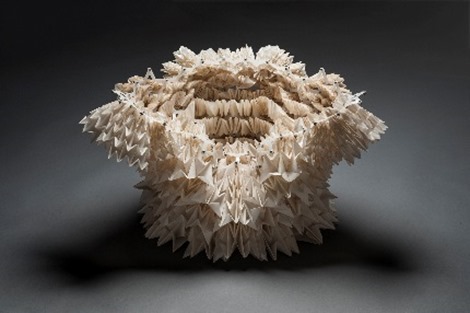 The Baltimore Museum of Art (BMA) presents Annet Couwenberg: From Digital to Damask, an intimate exhibition of 10 extraordinary works by Maryland-based artist Annet Couwenberg. The exhibition shows how art, science and history can produce fascinating innovations in textiles.

“Annet Couwenberg is a contemporary artist adept at the use of new technology, but deeply appreciative of historical textiles and costume as well as the hand processes used in their creation,” said Anita Jones, Curator of Textiles. “Her art bridges the traditional and the new both aesthetically and technically.”

Couwenberg has had a lifelong interest with the dialogue between the internal structure of an object and its outer façade. In the summer of 2014, the Maryland Institute College of Art professor and internationally exhibited artist received a prestigious Smithsonian Artist Research Fellowship. As a part of this program, which paired scientists with visual artists, Couwenberg worked with Dr. Lynne Parenti at the National Museum of Natural History to examine fish fossils, focusing on the interdependence of skeleton and skin in aquatic life forms captured through technological methods including 3-D scan, x-ray, and microscopic photography. Returning to her studio, she applied the patterns and structures learned through this experience to her artwork, which is also visually connected to traditional textiles and costume forms drawn from her Dutch heritage.

In her most recent work, the artist pays homage to the Netherlands’ production of damask during the 17th century, when this fabric was referred to as “white gold.” Inspired by the BMA’s Portrait of a Young Woman (1634) by Dutch artist Frans Hals, Couwenberg returned to her homeland to weave four panels at the TextielLab in Tilburg featuring designs generated by her Smithsonian studies and adapted to damask patterns.

Born in the Netherlands, Couwenberg (American, b. 1950) received an MFA in fiber from Cranbrook Academy of Art, Michigan, and an MFA in textiles from Syracuse University, New York. In 2014, she was awarded a Smithsonian Artist Research Fellowship. The artist has exhibited internationally, including Gyeonggi Museum of Modern Art, Ansan, Korea; HOMA Museum, Seoul, Korea; Museum of Arts and Design, New York; Delaware Center for Contemporary Arts; and Decorative Arts Museum, Arkansas. Her work has been widely reviewed in leading publications.

The exhibition is curated by Anita Jones, Curator of Textiles.