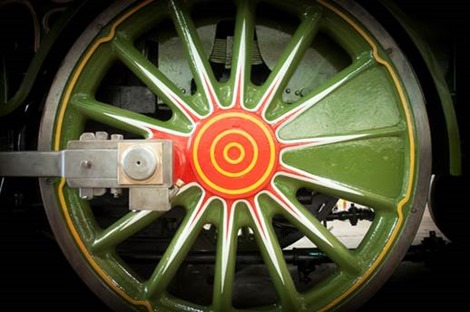 The first 250 visitors who arrive for this festive celebration will receive a free commemorative postcard of the #25 “William Mason Locomotive.” Donors who give a contribution of $161 (the age of B&O #25) or more on September 16 at the B&O Railroad Museum will receive a brass holiday ornament, featuring the B&O #25.

Master Metal conservator, George Harwood, cast two additional bronze William Mason locomotive name plates, while recreating the pair that were lost from B&O #25 ages ago. These are exacting replicas designed and cast from Civil War period photographs of other Mason locomotives and will be available via to charity auctions, with a minimum bid of $10,000 each.

Proceeds from these contributions and bids will benefit the Museum’s mission of preservation.

The restoration of B&O #25 represents one of the highest achievements of the Museum’s restoration program. The day’s debut celebration offers its fans special programing and tours, highlighting the locomotive’s history, celebrity, and restoration process. Archival artifacts and images of the Mason, not usually on public display, will be available for everyone to see at the Museum’s annual Civil War Days for this special weekend.

The last restoration that B&O #25 received was back in the mid-1990s, when it was briefly renamed “Wanderer” for the 1999 film: “Wild Wild West” that starred actors Will Smith, Kevin Kline, and Selma Hayak. For its 100th birthday, in 1956, the B&O #25 appeared in the feature film: “The Great Locomotive Chase” that starred Fess Parker and James J. Andrews. This “celebrity” locomotive would go on to be featured in four other major motion pictures.