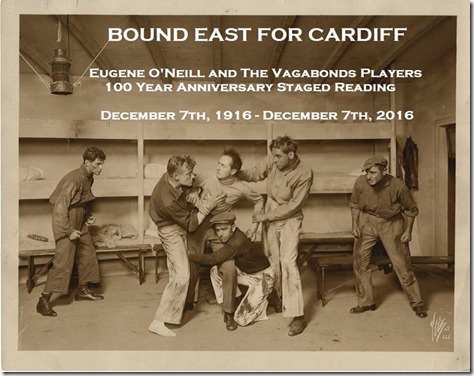 WHEN: Wednesday, December 7, 2016, at 8pm—100 years to the day the play opened during the Vagabond's inaugural season.
WHERE: Oldest Continuously Running Little Theater in America located at 806 S. Broadway on the Square in Fells Point.
ADMISSION: free and tickets are not required.

The reading, directed by Mark Scharf, will be followed by a discussion of O'Neill and his Vagabond connection. You'll want to hear the story of how the Vagabond Players and O'Neill got together.

On December 7, 1916—the year the Vagabonds Players was founded—the Vagabonds produced then-unknown future Pulitzer and Nobel-prize winning playwright Eugene O'Neill's short, one-act play, Bound East for Cardiff. The Vagabond Players paid O'Neill $15 for this script, and this was his first royalty ever as a playwright. O'Neill's play shared a bill with Strindberg's The Stranger and Maeterlinck's The Miracle of Saint Anthony.

Come and enjoy this dramatic piece of history.