Moon Over Buffalo
by Ken Ludwig
directed by John Desmone

WHEN:  May 27th through June 26; Friday and Saturday at 8:00pm; Sunday at 2:00pm.
WHERE: Vagabond Theatre, 806 S. Broadway, Baltimore
TICKETS: Tickets can be purchased online at www.vagabondplayers.org or at the door ($10-$20); special rates for groups available on line. Friday night performances feature special pricing $15 for everyone. Plus, there is a $10 Thursdays on Broadway! performance on June 23 at 8:00pm 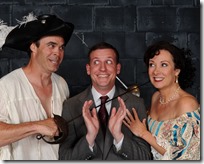 This riotous farce has been deemed a "love letter to live theatre.” George and Charlotte Hay are a couple of washed up touring actors who are given a sudden chance at stardom IF all goes well during their make-or-break performance of Private Lives. Needless to say, anything that can go wrong does in this madcap comedy.

The show is John Desmone’s 100th production as an acclaimed regional director. He sets a fast pace, and the stellar cast of Greg Guyton, Michele Guyton, Carol Evans, Caroline Kieback, Henry Reisinger, Jr., Jim Baxter, Jess Kim and Richard Manichello gallop through the antic-filled action of the play. It is two hours of pure fun.