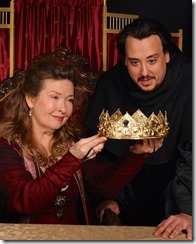 THE LION IN WINTER
by James Goldman
directed by Steve Goldklang

WHEN: through May 8, Friday and Saturday at 8:00pm; Sunday at 2:00pm. Plus, there is a $10 Thursdays on Broadway! performance on May 5th at 8:00pm
WHERE: Located at 806 S. Broadway, the Vagabond Theatre is easily accessible to patrons
TICKETS: Tickets can be purchased online at www.vagabondplayers.org or at the door ($10-$20); special rates for groups available on line. Friday night performances feature special pricing $15 for everyone. (Above: Cherie Weinert and Michael Zemarel) 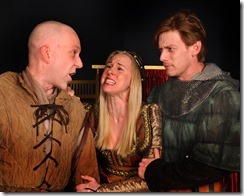 The Vagabond Players' remarkable production of  The Lion in Winter is the story of the battle for the future of the crown of England between King Henry II and his estranged—but still powerful—Queen Eleanor of Aquitaine. The play is full of rapier-sharp wit and political drama. (Right: Eric C. Stein, Barbara Madison Hauck, David Shoemaker)