A WEEKEND TO REMEMBER @ AN DIE MUSIK LIVE!

CLICK HERE TO PURCHASE TICKETS (Link on graphic will not work)

ROBUST ARTS PROGRAMMING FROM PUSHCART PLAYERS: BOOK A PROGRAM FOR YOUR SCHOOL NOW!

EVENTS THIS WEEK @ THE PEABODY INSTITUTE

A REASON TO READ…

PANEL DISCUSSION ABOUT “THE WORLD OF BLANCHE DUBOIS” @ EVERYMAN THEATRE

Justin Hoekstra, detail from the Pleasures of Being a Ghost: Wyoming #5, 2016, acrylic on canvas

JUSTIN HOEKSTRA: ALL HAT NO CATTLE

RSVP to this Opening here!

CURATOR'S STATEMENT | Without a particular referent or immediate comprehension, Justin Hoekstra's paintings pull at something - in our memories or our bodies - slightly beyond recognition. The pieces could be any number of things inside or outside of us. They are a sunset, a sidewalk, a rusty wall, the inside of closed eyelids. At points one is reminded of the passage of time, the erosion of earth, the way light and energy are emitted from objects of creation. Hoekstra is creating lyrical movements within the push & pull of color and form, and the way patterns emerge then dissipate.

From a place including and beyond visual appreciation, these works hold the viewer. Sometimes initially quiet or subtle, they tap into a deeply resonating momentum. Certain works can be jarring - colors collide and complex layers pulse out at the viewer. Others take longer - a slow burn, a quiet overtaking.

These works are magnetic. They act like meditation, or an orgasm, or crying. They seem like a circle, where grief is a form of love, abstraction creates focus, obscurity leads to clearer understanding. These paintings radiate an energy from within that is undeniably felt. They access the hum that constantly vibrates through all things. This vibration is something we are always experiencing, psychologically or emotionally, but usually on a subconscious level. Here it comes forward. We can visualize the buzz and then notice it coursing through our minds, our bodies, and out into the world.

ARTIST STATEMENT  |  ALL HAT NO CATTLE

Machines shape my work, the paintings undergo a process of accumulation and removal akin to the manner in which each of us are formed by forces at play in the reality we occupy and maintain. Work begins with the selection of a surface to which acrylic paint will be applied with brushes. After a number of layers have cured the paint is then refined using a combination of mechanical means (random orbital sander) and manual sanding. Pressure and refinement through abrasion points us towards the idea that the end result may be a shiny diamond or a lump of coal, both useful in some way, but each lacking their own meaning prior to evaluation by external systems.

The works presented here are investigations of and meditations on the value of permanence/impermanence at the dawn of the post-human era. As we approach a zone wherein the output of artists is becoming un-tethered from the limits of their corporeal form we may wonder what types of 'eyes' might be looking at these things in years to come...machine eyes...hybrid eyes. What does it mean to be making these things when human consciousness might become migratory, taking root in a series of vessels that may be durable beyond our current understanding? Deep learning by computers and A.I. systems are beginning to shift the desires of society in fascinating and subtly unpredictable ways. The foundations of meaning always change when the scale of time is radically altered. Is it possible to anticipate these potential futures and make art objects that might have value there?

The works here present some possible options. The paintings are potentially better in many practical ways than any human might ever hope to be. They will, if properly stored, outlast the humans that contributed to their creation. They do not have the capacity to be opinionated and argumentative about the conditions in which they 'exist' which I would imagine makes them easier to relate to than most humans. Long after I lose the ability to earn and amass capital the paintings should be able to participate in such activity.

With humanity poised as ever on the edge of an uncertain future, I wonder what kind of civilization we will become. Are we heading toward a dystopian civilization focused on ownership and fighting? Or will we become a practical utopia with individuals given the means to pursue whatever brings them joy?  My hope is that we are moving towards the latter. To that end I make these things and hope that they might outlive me and confound the machine eyes of the future, that they might give these machines pause as they sort through the piles of human bones...

Justin Hoekstra was born in 1980 on Election Day and raised in the suburbs of Chicago. His family moved a handful of times between his 4th and 8th birthday. After leaving high school early to take classes at the College of DuPage in Illinois he became an AmeriCorps Member, working for the American Red Cross of Greater Chicago and at a Salvation Army day shelter on the weekends. He also worked across the street from the Museum of Contemporary Art in Chicago, helping to foster an interest in art. He enrolled at the University of Illinois-Chicago (UIC) the same year where he studied theater. After a period working and living in the suburbs with his parents he went to Burlington, Vermont to visit his older brother and decided to stay. Hoekstra worked several odd jobs in Burlington and eventually enrolled in the Community College of Vermont. He subsequently transferred to the University of Vermont to study art, graduating in 2012. He relocated to Baltimore, Maryland to pursue an MFA at the Maryland Institute College of Art (Hoffberger School of Painting) which he received in 2014. His interest in art was ignited early in life by experiences at museums throughout Chicago. He has had numerous solo exhibitions and been included in various group exhibitions as well. His work is held in both public and private collections. Hoekstra has participated in various residency programs including the Lighthouse Works and the Vermont Studio Center. In March 2016, he was in Wyoming at the Jentel Residency Program. Justin is the founding fellow of the Jordan Faye Contemporary Fellowship in Painting and currently lives and works in Baltimore, MD.

A tale of seduction among the rich and powerful, who play with lives like pawns on a chessboard. This is a classic drama for exploring decadent sexuality, morals and manipulation played as the ultimate game with tragic results.

Noting is too cruel, as these rivals use sex as a weapon of humiliation and degradation, all the while enjoying their cruel games, and destroying lives.
From the novel by Choderlos de Laclos.

THE POWER OF THEATER…IN A CARTOON

One of my favorite cartoons:

WHY TEACH THEATER IN OUR SCHOOLS?

Each year, Pride captains, crew, board members, and staff gather together for a wreath-laying ceremony at the Pride of Baltimore Memorial in Baltimore's Inner Harbor. 2016 marks the 30th year since the loss of Pride of Baltimore, her captain, and three crew members. This year, we are planning a slightly larger gathering at Fort McHenry National Monument and Historic Shrine. 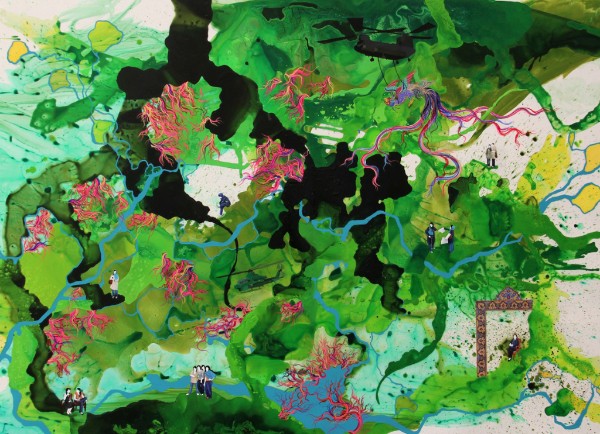 One of the most highly regarded experts on contemporary and antique quilts in the world, Robert Shaw is the author of such critically acclaimed definitive books as The Art Quilt, Art Quilts: A Celebration, and American Quilts: The Democratic Art.

Shaw’s talk will address how from 1800 to the present day there have always been art quilts that were primarily decorative, as well as utilitarian pieces that transcend function and rise to the level of art. He will also comment on several works in the BMA’s current exhibition New Arrivals: Art Quilts. (Above: Adrien Rothschild. Purple Mountains. 1991. The Baltimore Museum of Art: Gift of the Artist, Baltimore, BMA 1998.360)

The free event is generously sponsored by Herbert Katzenberg and Susan Katzenberg in memory of Gloria B. Katzenberg.

Unlike its predecessors, the art quilt is intended for display on the wall rather than the bed.

Among the many recent additions to the BMA’s late 20th-century textile collection are five stunning quilts created by professional artists who chose to express themselves with cloth and thread, in some cases abandoning their original media in order to do so. These intricate art quilts include examples of works by the foremost proponent of the art quilt, Michael James, whose stunningMetamorphosis (1983) plays with color transitions and the transformation of space. Pamela Studstill’s elaborately pieced and painted quilt, #76 (1988), is accompanied by the original commission drawing and fabric swatches.

Quilts by Baltimore-based artists Elizabeth Scott and Adrien Rothschild link the art quilt to this city. Scott’s esoterically appliquéd and stitched Plantation (1980) gives an abstract depiction of both the night sky and the furrowed earth as remembered from her childhood in South Carolina. Rothschild—influenced by the paintings of her mother, Amalie Rothschild, and the work of M.C. Escher—created Purple Mountains (1991), an abstractly pictorial quilt of forested mountains, sky, and sun that synthesizes her love of color and geometric design. Gayle Fraas and Duncan Slade challenge the traditional definition of quilts by blending architectural and textile elements for their Marsh Island (1986) triptych composed of painted plywood panels surrounding dye-painted and quilted cloth insets.

Conservatory student recitals are free and open to the public. For a list of recitals including student name, degree program, instrument/voice, date, time, and hall, visit peabody.jhu.edu/recitals