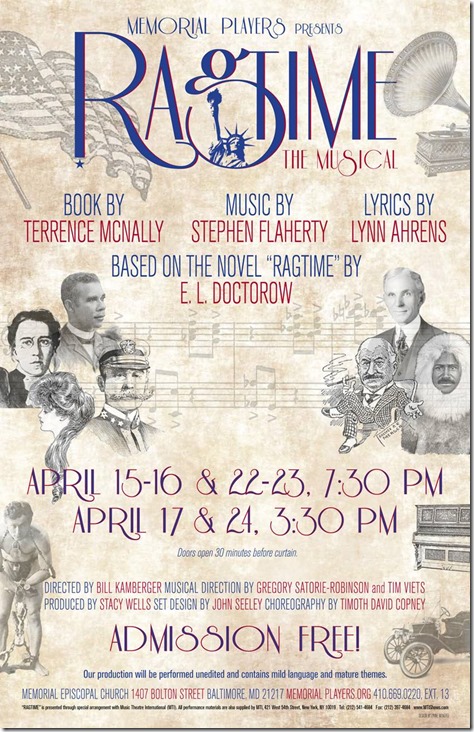 The story of Memorial Players’ spring musical this year is almost prescient in its relevance to Baltimore (and the country) in 2016—wealth inequality, abuse of power, corruption, the struggles of immigrants, collectivist organizing, cults of celebrity, the American dream lost and then found. What is almost more amazing is that it was selected by our Theater Committee more than two years ago.

Based on the 1975 novel by E. L. Doctorow (who passed away last year), Ragtime tells the story of three groups of people in the United States in the early 20th century whose lives profoundly intersect: African Americans, represented by Coalhouse Walker Jr., a Harlem musician; upper-class suburbanites, represented by Mother, the matriarch of a white upper-class family in New Rochelle, New York; and Eastern European immigrants, represented by Tateh, a Jewish immigrant from Latvia. Historical figures including Harry Houdini, Evelyn Nesbit, Booker T. Washington, J. P. Morgan, Henry Ford, Stanford White, Harry Kendall Thaw, Admiral Peary, Matthew Henson, and Emma Goldman are represented in the stories. Ragtime has much to say about justice and equality, life and love, and finding meaning in all of it.

Nominated in 1998 for numerous Tony and Drama Desk Awards, Ragtime won for Best Book by the legendary Terrance McNally, and Best Score (Music and Lyrics) by Stephen Flaherty and Lynne Ahrens. All three were inducted into the Theater Hall of Fame this past year.

Pre-show receptions, held by Bolton Hill residents before each Friday and Saturday evening show, are a great way to donate to the work of Memorial Players and to meet other members of the Memorial Players community. Food and refreshments will be provided and reception goers are guaranteed a reserved seat in the front rows of the theater.

Memorial Players is an education and outreach program of Memorial Episcopal Church, a diverse community in historic Bolton Hill near downtown Baltimore celebrating over 150 years of worshiping God and serving people.  The productions depend on voluntary contributions of time, talent, materials and funds to cover all expenses. Memorial Players auditions and performances are open to all at no charge.

For more information, please go to memorialplayers.org or contact Paul Seaton at 410-669-0220, ext. 13 or email pseaton@memorialepiscopal.org