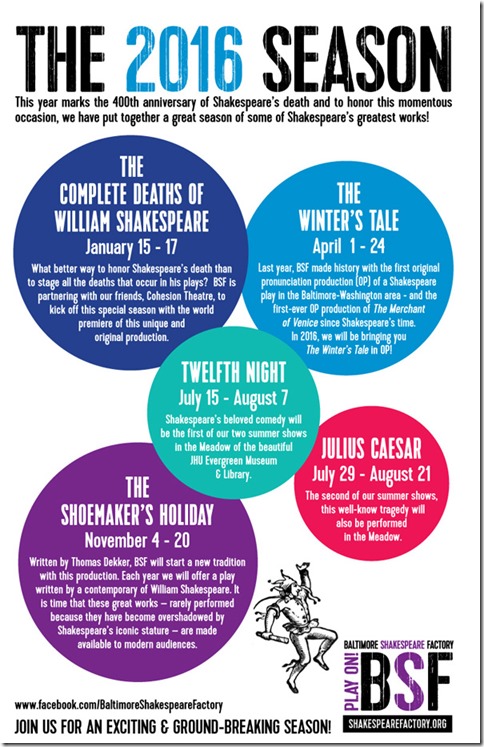 Baltimore Shakespeare Factory (BSF) is delighted to present its 2016 season. It is the 400th anniversary of Shakespeare’s death and to honor this momentous year, BSF continues to bring ground-breaking productions of the Bard’s plays to the Baltimore/Washington area. This year’s offerings include a rarely performed play by one of Shakespeare's contemporaries, Thomas Dekker, and the return of OP.

This April, BSF presents Shakespeare’s fairytale of jealousy, loss, redemption and love. The Winter’s Tale, will be performed in Original Pronunciation (OP) as Shakespeare heard it. The play follows in the footsteps of BSF's well-received and historic production of The Merchant of Venice which opened the 2015 season.

BSF is excited to welcome the acclaimed Shakespearean actor, director and professor, James Keegan, as Guest Director for The Winter’s Tale.

Baltimore Shakespeare Factory (BSF) is a nonprofit organization that entertains, educates, and enriches the Baltimore community by creating performances that inspire audiences with the wonder of William Shakespeare’s plays and language.

In order to achieve this mission, BSF has the following strategic priorities:

to produce the works of Shakespeare and his contemporaries by re-creating, as closely as possible, the staging conditions of Shakespeare’s time, such as doubling, cross-gender casting, and the use of universal lighting so interaction can occur between the audience and the actors

to present these works with unparalleled quality of language, intent, and focus so that the audience effortlessly understands each word and the full spectrum of meaning in these masterpieces

to maintain a vibrant education program that consists of summer camps, children’s troupes, lectures, and workshops and classes for people of all ages