In October 2015 the B&O Railroad Museum acquired at auction the locomotive "York" from the Chicago Museum of Science and Industry.   Acquisition of this 1926 replica of the 1831 B&O Railroad Locomotive “York” completes the Museum's collection of the three working replicas of early B&O locomotives built by the B&O's own Mt. Clare Shops in Baltimore for “The Fair of the Iron Horse”, a two-week long extravaganza held at Halethorpe, Maryland in the fall of 1927 to celebrate the 100th anniversary of the B&O Railroad.  Now 81 years after the “York” landed in the Chicago museum’s collection, the “York” rejoins the Museum’s other two replicas built in 1927 for the Fair, Peter Cooper’s “Tom Thumb” (original 1830) and “Lafayette” (original 1837) on exhibit in the B&O Roundhouse.

A special weekend of train rides at the B&O Railroad Museum will also be offered at this celebration and depart on Saturday, February 27 at 11am, 1pm, and 2:30pm and Sunday, February 28 at 12:30pm and 2pm. This narrated twenty-minute train ride travels along the first commercial mile of railroad right-of-way laid in America.

The C&O Canal Historical Society presents The Underground Railroad and will be on-hand to discuss the significance of the canal and the competition that existed between it and the B&O Railroad in reaching transportation completion back in the early 1800s.

On Saturday, February 27, kids can participate in the Railroad’s Birthday Bash that includes train and party games, interactive education stations, and more at this railroad party.

About the B&O Railroad Museum:
The Baltimore & Ohio Railroad Museum, an affiliate of the Smithsonian Institution, is dedicated to the preservation and interpretation of American railroading and its impact on American society, culture, and economy. The Museum is home to the oldest, most important and comprehensive collection of American railroad artifacts in the world including an unparalleled roster of 19th and 20th century railroad equipment. The 40-acre historic site is regarded as the birthplace of American railroading and includes the 1851 Mt. Clare Station, the 1884 Baldwin Roundhouse, and first mile of commercial railroad track in America. For further information on the Baltimore & Ohio Railroad Museum, please call 410-752-2490 or visit www.borail.org

WHY TEACH THEATER IN OUR SCHOOLS?

BE A B.I.G. VALENTINE THIS WEEKEND!

Did you know that when World War II broke out in the U.S. with the bombing of Pearl Harbor on December 7, 1941 the Maryland Historical Society was already 97 years old? Not only were we firmly ensconced in the Mount Vernon neighborhood since 1920 but we celebrated our centennial, hosted Vice President Harry Truman for an evening lecture, and housed the state's official War Records Commission. Collecting information on Maryland's military men and women continued a tradition begun during the first World War when the society also served as the state's official repository. The society published eleven volumes of these records, including personnel service records and reports on industry and agriculture.

Now, 70 years after the end of World War II, we lose veterans at the rate of 400 a day. The passing of the greatest generation is truly a historical milestone of an era that helped shape this country as we know it today. Join us on February 27 for the Young Defender's Victory Bash where we will bring the 1940s to life once again!

Join Us at The February Victory Bash

The 1940s were a trying time for Americans both at home and on duty. Families missed enlisted relatives and creature comforts were restricted by wartime rations. Sacrifice was a common experience for the Greatest Generation, but even in those trying times they knew how to throw a good party! USO shows brought a taste of home to weary troops on the front with the best of American music, dancing, and entertainment, and citizens celebrated countrywide when victory was declared in 1945.

During America's involvement in WWII, the Maryland Historical Society housed the state's official War Records Commission. Over a period of several years, the staff obtained photographs and textual material from Maryland industries and farms, every branch of the military, government agencies, civic groups, and relief agencies. In addition, the staff conducted personal interviews and collected articles from several Maryland newspapers. The result was a deep, rich collection of material, thoroughly documenting the involvement of Marylanders in the war and the war's impact on all aspects of life in the state.

Stewardship of this irreplaceable collection is hard work! Proceeds from the Victory Bash go a long way in supporting the Maryland Historical Society's one of a kind archive.

The archives of the Maryland Historical Society also contain hundreds of images by famed Maryland photographer Aubrey Bodine. His photographs span of wide variety of subjects, including the exuberant homecoming of our heroes such as the black and white photograph above.
Help us channel this swinging spirit at a fantastic venue, Baltimore's Scottish Rite Masonic Temple, in Baltimore's Guilford neighborhood. We're calling all flyboys and GI Janes to help us put the "big" in Big Band with a big dance floor, big sound (both swing and modern music), and delicious refreshments. Let's celebrate the Allied Victory!

Get your tickets to the Victory Bash now by clicking here.
All beverages and appetizers are included with ticket purchase. Hearty hors d'oeuvres provided by Chef's Expressions. Liquor provided by Manatawny Still Works. Beer provided by Old Dominion Brewing. Wine and bubbly provided by Frederick Wildman and Sons.

THE IMPORTANCE OF LIVE THEATER SHARE THE LOVE THIS WEEKEND @ AN DIE MUSIK LIVE!

FRENCH-AMERICAN SINGER-SONGWRITER TO APPEAR @ AN DIE MUSIK LIVE! FOR 2 SHOWS ON FEB. 12

The French-American singer-songwriter performs artfully crafted songs that blend the emotional intimacy of Norah Jones and Eva Cassidy with the French chic of Françoise Hardy and Carla Bruni.

“Best Vocalist of 2015. A profound, mature talent. She may be young, but she has an old soul.” - Seven Days

23-year-old singer-songwriter Francesca Blanchard was born and raised in France and moved to Vermont when she was 10. Her intimate original songs, performed in French and English, reflect on her life journeys, both physical and emotional. Francesca's 2015 debut album deux visions has been hailed as one of the best records of the year.

"The most impressive album by a Vermont musician this year came from a singer-songwriter who segues seamlessly between songs in English and French. Deux visions is a stunner that reveals a young, mature musician with a bucket load of potential.” Burlington Free Press

“Deux visions shines on the strength of Blanchard’s accomplished compositions, tasteful guitar work and gorgeous vocals. A seamless mix of folk, jazz and roots-rock with some French chanson thrown in for good measure. The most ambitious and impressive debut album to come out of Vermont since Grace Potter.” The Times Argus

"Colored by her love of folk, rock, jazz, French chanson, soul, world music and pop, Ms. Blanchard takes deux visions beyond the standard spare singer-songwriter route by encompassing one genre into another and folding one influence into another.” World Music Central

“Singer-songwriter Francesca Blanchard sounds like a throwback to the old days of folk singers that came from Laurel Canyon in the 70s. This album has her singing in English and French, with acoustic and electric guitar, with a voice that has a hint of early Joni Mitchell and a feel of Neil Young.” - Jazz Weekly

Learn more about Edgar during a free lecture by our conductor, Maestro Giovanni Reggioli, a half hour before each performance.

Need to eat before the opera? Dine at the mansion before the performance! Complete your BCO experience with a delicious dinner or brunch buffet preceding the opera. $42 includes the full buffet, tax and gratuity. Make your reservations now and pay at the club. Reservations must be made 48 hours in advance to guarantee seating.
CLICK HERE FOR DINNER RESERVATIONS

BCO is pleased to present Puccini’s rarely heard second opera Edgar. Borrowing thematically from Wagner’s Tannhäuser, Edgar is about a medieval knight torn between sacred and profane love. On the one hand is Fidelia, pure of spirit and conduct. On the other hand is Tigrana, frivolous and debauched. Puccini’s gorgeous writing truly takes center stage in this opera, and this early example of his genius will work especially well in BCO’s intimate setting 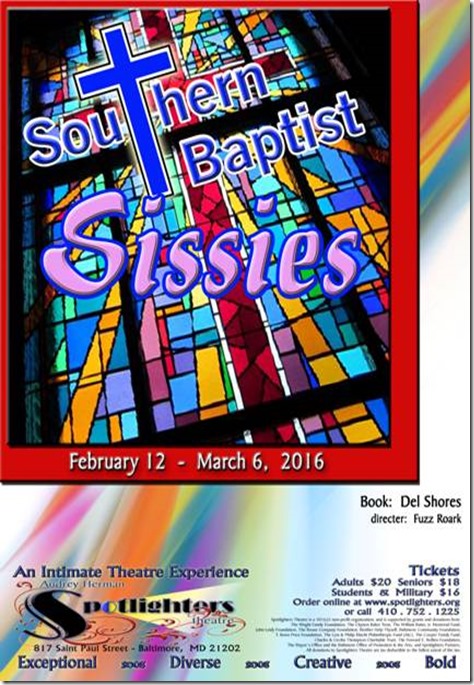 Follow the journey of four gay boys in the Dallas Baptist Church. Storyteller Mark Lee Fuller tries to create a world of love and acceptance in the church and clubs of Dallas, Texas, while desperately trying to find a place to put his own pain and rage. The world Mark creates also includes two older barflies, Peanut and Odette, whose banter takes the audience from hysterical laughter to tragedy and tears. With a theme of religion clashing with sexuality, Sissies strives to find  balance and acceptance in the world of religion.

There will be a POST-SHOW DISCUSSION following each performance, to allow the audience time to voice their views of issues raised in the performance, and to discussion ways to create a world of acceptance, understanding and hope.