Todd Lerew is a Los Angeles-based artist and composer working with invented acoustic instruments, repurposed found objects, and unique preparations of traditional instruments. Much of his work deals with the physical properties of sound and the nature of perception, exploring the use of sound as a plastic medium, and revisiting relationships within a performance environment. Other works examine the effect of isolated elements of indeterminism within mostly-closed systems, and the generation of musical material by deviation from an impossible given task.

Lerew is the inventor of the Quartz Cantabile, which utilizes a principle of thermoacoustics to convert heat into sound, and has presented the instrument at Stanford’s CCRMA, Georgia Tech, the American Musical Instrument Society annual conference, and Machine Project in Los Angeles. He is the founder and curator of Telephone Music, a collaborative music and memory project based on the children’s game of Telephone, the last round of which was released as an exclusive download to subscribers of music magazine The Wire. He has received commissions from So Percussion (New York) and the Now Hear Ensemble (Santa Barbara), in addition to performances by members of the San Francisco Symphony Chorus, the Wet Ink Ensemble (New York), and the Canticum Ostrava choir (Czech Republic). 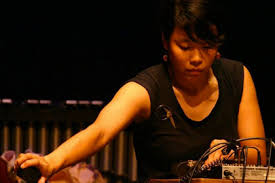 Bonnie Jones is a Korean-American writer, improvising musician, and performer working primarily with electronic music and text. Born in 1977 in South Korea she was raised on a dairy farm in New Jersey, and currently resides in Baltimore, Maryland. Bonnie creates improvised and composed text-sound performances that explore the fluidity and function of electronic noise (field recordings, circuit bending) and text (poetry, found, spoken, visual). She is interested in how people perceive, “read” and interact with these sounds and texts given our current technological moment. Bonnie has received commissions from the London ICA and has presented her work in the US, Europe, and Asia and collaborates frequently with writers and musicians. She received her MFA at the Milton Avery School of the Arts at Bard College.