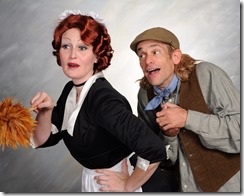 WHEN: through November 15; Friday and Saturday at 8:00; Sunday at 2:00 and one Thursday performance at 8:00
WHERE: Vagabond Theatre, 806 S. Broadway, Baltimore (easily accessible to patrons)
TICKETS: Tickets can be purchased online at www.vagabondplayers.org or at the door ($16-$24); special rates for groups available on line.  There is a $16 Thursday on Broadway! Performance on November 12th. 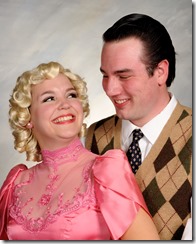 The marvelous musical murder mystery, Something's Afoot, at the Vagabond Theatre in Fell's Point  continues through November 15. This production features a dynamite cast of Baltimore's leading musical actors.  The  production is a revival of our 62nd Season (1978) production.

Whodunnit?!?! We're not telling! Amidst thunder, lightening and all sorts of mayhem, the bodies start piling up as fast as the laughter, as a dwindling group of frantic survivors race to uncover a cunning, murderous culprit. The musical has been lauded as "...both a spoof of and tribute to Agatha Christie."