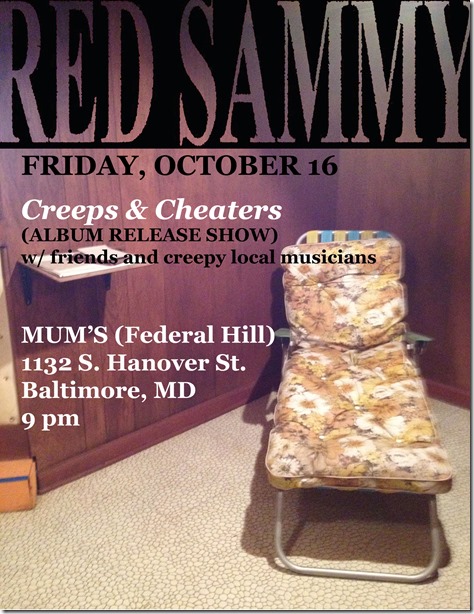 Baltimore-based songwriter, Adam Trice, and his band Red Sammy release their latest album, Creeps & Cheaters. The album is gritty, heartfelt, and soulful and delivers nine songs with lyrics that are poetic, poignant, and fresh. With the accompaniment of a full Americana-style rock band, the songs on this album erupt in all the right places.

MUM’S is a great little dive bar that is very supportive of independent music along the lines of alt-country, roots, Americana, and rock. On this night Red Sammy will be performing the album in it's entirety, revisiting older Red Sammy songs from previous albums and performing with a variety of local musician friends

“‘Sometimes You Forget What’s Real’ (a track from the new album) is a long, walking-speed tune that relies heavily on a world-weary mood to compel listeners’ ears. There’s a genial, earnest feel to the guitar that calls up August and Everything After-era Counting Crows, while the weeping electric guitar gives the tune a big ‘ol “alt-country” stamp not too far from the Jayhawks’ work. Extra bonus: Mountain Goats-quality yawps at the end of the vocals’ contributions. The whole tune comes together so beautifully that it’s hard to believe that it’s over 6 minutes long. If you’re into old-school, loose folk/country jams or any of the previous acts, this tune will perk your ears up,”
(Independent Clauses music blog)