DOCUMENTARY ABOUT GENTRIFICATION @ THE RED ROOM 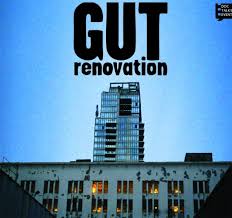 A documentary of small changes evolves into an historical record of New York. The resulting film is a melancholy, essayistic requiem for a neighborhood and an entire way of life; it also provides a case study of the rapid gentrification of our cities.

In 1989, together with a group of female friends, Su Friedrich rented and renovated an old loft in Williamsburg, an unassuming working-class district of Brooklyn. In 2005 this former industrial zone was designated a residential area and the factories, manufacturers and artists’ lofts were priced out by property speculators lured by tax breaks. Friedrich spent five years documenting with her camera the changes in the area between East River and the Brooklyn-Queens Expressway. She shows the demolition of industrial buildings and the construction of trendy new apartments for wealthy clients, watching old tenants leave and new inhabitants arrive. As she keeps meticulous record of developments, the extent and speed of the upheaval becomes clear. Her own tenancy agreement expires too and so her documentary images and trenchant commentary become the tools of her growing anger.

ABOUT THE FILMMAKER
Su Friedrich has produced and directed twenty 16mm films and videos, including Gut Renovation (2012) her newest release. Other notable films are Hide and Seek (1996), which screened at the Berlinale and at Sundance in 1997, and Sink or Swim (1990). Her work is widely screened around the world and has been the subject of retrospectives at numerous museums and festivals including The Museum of Modern Art, The Whitney Museum of American Art, The Rotterdam International Film Festival, The National Film Theater in London, the Bios Art Center in Athens, The Cork Film Festival in Ireland and The Stadtkino in Vienna. Her work is in the collection of the Museum of Modern Art, the Art Institute of Chicago, the Royal Film Archive of Belgium, the Centre Pompidou in Paris, the National Library of Australia, as well as many university libraries. The films are distributed by The Museum of Modern Art, Outcast Films, Canyon Cinema, The Canadian Filmmaker’s Distribution Center, Light Cone in Paris and the Freunde der Deutschen Kinemathek in Berlin.

Sight Unseen is a nomadic moving image series showcasing avant-garde film, video and expanded cinema. We are based in Baltimore, Maryland and have been inviting artists to perform and project since June 2012.

This screening is funded in part by The 2015 Contemporary Grit Fund Grant.