The Vagabond Players in association with The Baltimore Playwrights Festival presents 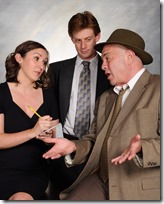 WHEN: July 10-26, Friday/ Saturday at 8:00 PM; Sunday at 2:00 PM
WHERE: Vagabond Theatre is located at 806 S. Broadway, on the square in Fells Point.
TICKETS: Baltimore Playwrights Festival Season 34 show. All tickets are $12.
Tickets can be purchased on line at www.vagabondplayers.org or at the door.

Is America ready for a gay President?  Governor Ned Worley is about to find out.  But can the ambitious politician prove the naysayers wrong, or will personal demons—and a troubled partner—scuttle his historic candidacy?

In her directorial debut, Chelsea Dove has cast some of Baltimore’s finest actors: Mark Scharf as Ned Worley is joined by Tom Sinn, Jeff Murray, David Shoemaker and Fiona Ford.

The playwright, Mario Correa, was recently awarded a 2015 BRIC lab residency at the Brooklyn Arts and Media Center, BRIC, to develop Commander. Mario’s debut, Tail! Spin!, was a New York Times “Critics' Pick” and played an acclaimed, extended run Off Broadway in 2014 and 2015. Mario has also written for television and documentary film, and he is co-host of Entertainment Weekly magazine's daily "News & Notes" program on SiriusXM Radio.