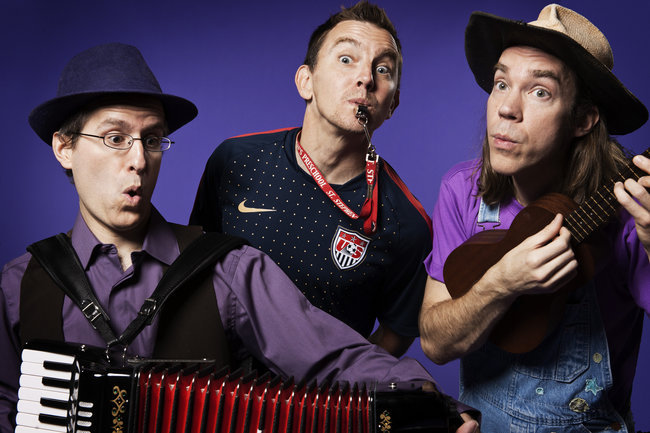 "Bubblegum Pop. The harmonies rival those of any killer alt-rock band (assuming they decided to sing about things little kids love)." —Parenting magazine

"Kudos to the great taste of the DC area. You already know what the rest of the country is starting to find out -- that Rocknoceros is a gem of a band." —Stefan Shepherd, Zooglobble.com

2015 is Rocknoceros's 10th anniversary year, and the band is set to celebrate like crazy. Highlighting the Maryland Science Center show will be an array of fan favorites from all four Rocknoceros albums, including "Colonel Purple Turtle" (a whimsical number about our favorite purple turtle), "Pink" (reflecting the rosy color of pigs, bubble gum, and selected flowers known as perennials), and "The United States of America" (from the band's very first CD). Families will also be treated to some of the "U.S. state-themed" songs from the band's new album, Plymouth Rockers.

Set for release on the 4th of July, Plymouth Rockers features a bevy of high-octane songs about 14 different states, along with a Rocknoceros take on Irving Berlin's classic anthem, "God Bless America." Kids and families can look forward to songs like "Louisiana," "The Sunshine State," "O-H-I-O," "Texas," and "Squeakers" (those tasty morsels of cheese found in Wisconsin).

As virtually every family with youngsters in the DC area knows, Rocknoceros is three guys: Coach Cotton, Williebob, and Boogie Woogie Bennie. Rocknoceros is the only show in town where families can catch a one-man-band setting the pace for a power trio, with Boogie Woogie Bennie playing the drums with his feet while his two hands are busy with the keyboard and keyboard bass. And he sings, too! When this one-man groove machine teams up with the guitar pyrotechnics of Williebob and the vocal prowess of Coach Cotton, the result is a triple-threat, bell-ringing explosion of power pop American energy and talent.

Rocknoceros has been at the forefront of the Washington, DC children's music scene since its inception, winning a remarkable eight Washington Area Music Awards. The band is a full-time commitment for the trio, which has performed upward of 2,000 shows for families over the past ten years, singing and playing all original compositions (with an occasional Beatles cover thrown in for good measure). In its first decade as a band, Rocknoceros has entertained tens of thousands of fans throughout the country and has gained significant national recognition with performances at Lollapalooza, Austin City Limits, Wolf Trap, and The Kennedy Center. In addition to Plymouth Rockers, Rocknoceros albums include Colonel Purple Turtle (2011, with an accompanying picture book), the NAPPA award-winning PINK! (2009), Dark Side of the Moon Bounce (2007), and Rocknoceros (2006).