ALL FEMALE CAST TO PERFORM “HENRY IV, PART I) 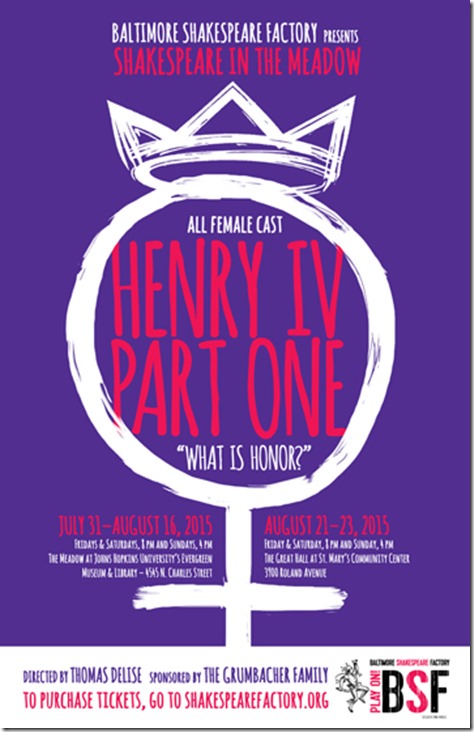 Baltimore Shakespeare Factory (BSF) is delighted to announce its second production for its Shakespeare in the Meadow summer series at Evergreen Museum & Library. The play will be directed by the company’s founding director, Tom Delise.

With a group of rebels amassing support and a son joking, drinking, and thieving every night, the reign of King Henry IV is off to a rocky start. An all-female cast puts a new twist on this male-centric history. Bring a blanket or chairs and a picnic dinner and enjoy Shakespeare under the stars! There will also be three performances offered at St. Mary’s Community Center.

Tom Delise founded the Baltimore Shakespeare Factory in 2006 and is the artistic director of the company. He received a BA degree in English from Brockport University and a master’s degree in liberal studies from Towson University. For the Factory, he has directed the historic production of The Merchant of Venice in original pronunciation, The Taming of the Shrew, Twelfth Night, The Comedy of Errors, Much Ado About Nothing, As You Like It, Macbeth, Love’s Labor’s Lost, Romeo and Juliet, Hamlet, Richard III, Measure for Measure and co-directed A Midsummer Night’s Dream with Chris Cotterman. He has also directed a staged reading of The Famous Victories of Henry V, performed at the American Shakespeare Center. Delise has been a high school teacher for over thirty years and is the author of the book, That Is the Question: The Ultimate Shakespeare Quiz Book.