THE REVIEWS ARE IN: “BLITHE SPIRIT” IS A HIT @ EVERYMAN THEATRE 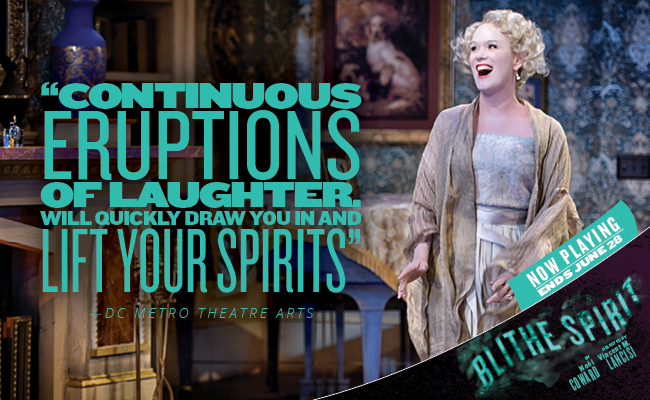 Filled with the sparkling wit and the undeniable charm of Noel Coward, Blithe Spirit is a clever comedy gem from well beyond the grave! As inspiration for his new novel, Charles Condomine invites the wonderfully eccentric medium Madame Arcati to perform a seance in his house. When things go terribly awry, Charles suddenly finds himself caught in an improbable love triangle between his naive living wife and his decidedly "spirited" former wife.

“A balm for Baltimore’s Soul. Sign of a good time had by all? Patrons in the parking garage elevator making plans to return for another performance… anyone who admires wit and style will bask in the Prosecco-light, bubbly glow of this production!”—DC Theatre Scene

“Blithe Spirit is a refreshing and lighthearted send-off to another great year of theater at the Everyman.”—MD Theatre Guide

"[Nancy Robinette is] a genuine scene-stealer as Madame Arcati, and that's where Everyman is especially fortunate. I didn't expect to encounter a second notable portrayal of the role so soon after savoring the one by brilliant, ageless Angela Lansbury, whose adorable Madame Arcati lit up Washington's National Theatre in March. Robinette tackles the assignment with a subtle, winning charm."—The Baltimore Sun