FORGET YOUR TROUBLES, C'MON GET HAPPY! WITH HERE COMES TROUBLE IN KENSINGTON MD 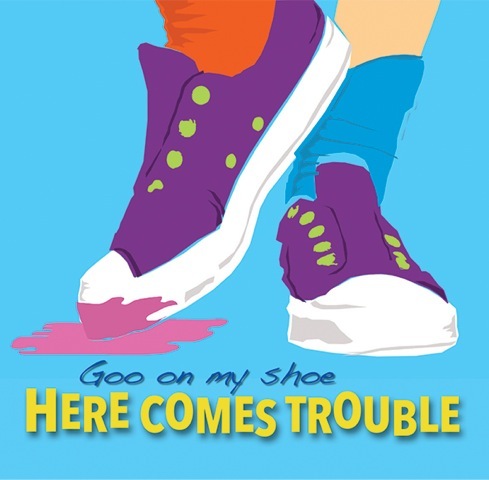 Led by a husband-and-wife duo of conservatory-trained musicians (who also happen to be lawyers), Here Comes Trouble's songs are an eclectic mix of pop, jazz, and hip hop, sprinkled with traces of rockabilly, samba and punk. Influences include artists from many genres, including Medeski Martin & Wood, Jimi Hendrix, Shel Silverstein and practically anything from the 1980s.

Here Comes Trouble takes kids and their grownups on musical adventures through bogs filled with procrastinating alligators, dessertless dinners, and soap-free bubble baths. At the June 6 Kensington show, kids will stomp and chomp along to "Alligator," move their feet to get themselves unstuck from the sidewalk on "Goo On My Shoe," and put the pedal to the metal for "Little Red Car." Following a quick survey of favorite dessert items, there'll be a rousing sing-along on the chorus of "I Want Dessert!" and a bark-along during "Don't Eat The Mailman, Doggie." SPOILER ALERT: The band plans to break out the old bubble machine for "Bubbles In My Bath."

Singer/songwriter Kelly Donohue and drummer Jon Babu met in 1991, while both were enrolled in joint degree programs at Tufts University and New England Conservatory, where, as Jazz Performance majors, they worked and studied with such jazz greats as Ran Blake, Dominique Eade, and Bob Moses. After college, Kelly focused on songwriting, arranging and performing with her vocal quartet Onomatopoeia, while Jon performed and recorded with dozens of bands, toured Germany with a jazz trio, and made NYC headlines with the hip hop group Red Time. Fast forward to law school for both Kelly and Jon, marriage, children and very successful legal careers in the DC metro region.

Here Comes Trouble continues to find a welcome spot on the regional music scene with performances at local venues such as Port Discovery in Baltimore and festivals like Rockville Hometown Holidays and Frederick's Summerfest. Songs from Goo On My Shoe are already receiving radio airplay, two songs made the International Songwriting Competition semi-finals this year, and one song took third place at this year's Mid-Atlantic Songwriting Contest.

Goo On My Shoe will be available online at Amazon.com, CDBaby.com and iTunes, and at all Here Comes Trouble shows.

If you attend the event, tell them you learned about it from the Charm City Arts Maven! Subscribe to get free daily updates!
Posted by Ruth Ross at 9:10 PM