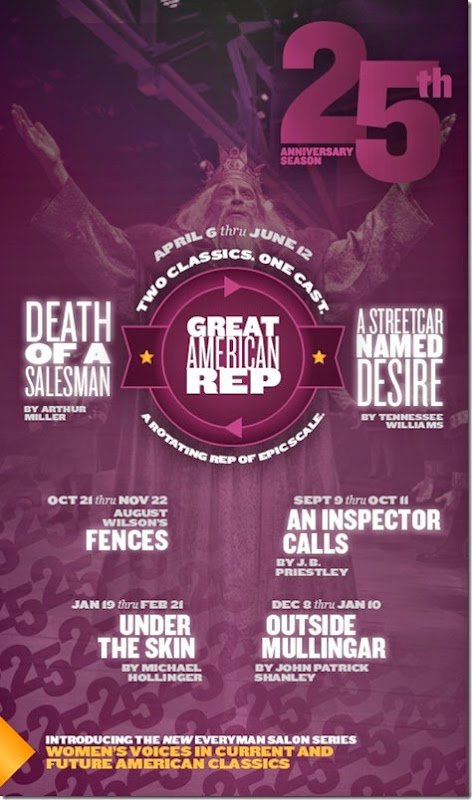 25 years. Everyman has truly come of age. We started as a young, storefront theatre without a home. Today, we have a Resident Company of some of the finest actors in the region and a beautiful new facility in the heart of the Bromo Arts and Entertainment District.

For our 25th anniversary, we have pulled out all the stops. We will laugh together, cry together and marvel at how our Resident Company will transform before our very eyes through 6 beloved, award-winning stories—with a centerpiece so epic in scale, it can only be called: The Great American Rep.

We want you beside us as we celebrate this milestone with our biggest season yet. Join us. Subscribe today.

"Superb! An icon of the American theatre." –The Boston Globe
Winner of the Tony Away and Pulitzer Prize, Arthur Miller's profound and powerful tragedy of an American dreamer is a dramatic masterpiece. Willy Loman is the ultimate everyman. His life of hard work has not translated into the wealth and respect he dreamt of. As retirement draws near, his eldest son refuses to follow the path Willy has planned for him. As buried secrets from the past come to light, Willy's pursuit of the Aemrican dream begins to fade. Since it was first performed in 1949, Death of a Salesman has been recognized as a milestone of American theatre and continues to strike a chord with audiences around the world.

"Tennessee Williams' most celebrated work." –New York Times
One of the most remarkable plays of our time, Tennessee William's Pulitzer Prize-winning southern drama comes to life on Everyman's stage. Blanche DuBois, a faded and delicate Southern Belle, has mysteriously arrived on the doorstep of her younger sister, Stella, and her husband, the sexy yet brutish Stanley Kowalski. Blanche makes herself at home in the couple's small apartment. However, Blanche's web of lies to cover her past soon begins to crumble. Her downward spiral brings her face to face with Stanley, leading to a final plea of passion and desperation that changes them both forever. 68 years after it was written, A Streetcar Named Desire is as spellbinding as ever.

"The theatrical equivalent of a page turner." –Daily Mail
The ultimate detective story, this gripping psychological thriller is the perfect cross between the worlds of Downton Abbey and Sherlock Holmes. The respectable Birling family are at home hosting a dinner party in honor of their daughter's recent engagement. An unforeseen knock at the door brings a sudden stop to the celebration. Enter Inspector Goole, who brings word of the death of a young woman. The questioning of each family member begins, dark secrets are uncovered and slowly the mystery surrounding the untimely death unravels. Filled with twists, turns and gasps An Inspector Calls will leave you guessing until the very last moment!

"Universal enough to touch a chord in every human heart." –New York Times
Winner of the Pulitzer Prize, two-time Tony Away winner, and one of the most groundbreaking plays of the 20th century, Fences is a classic story of father and sons, dreams and disappointments, and challenging the realities of the American Dream. Troy Maxson, "one of the great characters in American drama" (New York Post), is a garbage collector and onetime home run kind of the Negro baseball league. Shut out of the big leagues, Troy turned away from a world of unfulfilled dreams and denied opportunities. Now in the changing cultural landscape of the late 1950s, his youngest son, Cory, has become an emerging football star and sees the world through very different eyes. Troy to come to terms with his past or risk tearing his family apart at the seams.

“John Patrick Shanley's finest work since 'Doubt'." –New York Times
From the Pulitzer, Oscar and Tony Award winning of author of Doubt and Moonstruck comes a charming romantic comedy perfect for the holiday season. Set against the rolling hills of Ireland, Outside Mullingar is the unlikely love story of Anthony and Rosemary – two introverted 40-something neighbors, whose families are in a bitter land dispute. Full of laughs and tenderhearted moments, John Patrick Shanley's poetic Irish fable reminds us all that it's never too late to take a chance on love.

“A story that hits home to just about every living, breathing human on earth.” —Philadelphia Weekly

Hot off a sold-out run at the Arden Theatre in Philadelphia, Michael Hollinger's (Opus, Red Herring) funny and moving new play explore the curious nature of family dynamics and the true meaning of giving a part of yourself away. Lou has a strained relationship with his daughter Raina. But when he needs a kidney transplant in order to survive, Raina must decide if she can come to terms with her anger and resentment long enough to save her father's life. As Raina struggles with her decision, she meets another potential donor candidate, Jarrell, and her immediate connection with him send sparks flying. Surprising revelations from the past are made, as Raina wrestles with just how much of herself she is willing to give up.

New! Everyman Salon Series: "Women's Voices in Current & Future American Classics"
The women of Everyman's Resident Company are delighted to curate and direct a series of readings, celebrating current and future American classics written by women. To complement the Great American Rep, this series will feature some of the greatest plays of the 20th century, with a strong focus on the visceral human experience that marks the work of the Everyman company. The readings will be more interactive in nature, with an imaginative salon setting in our building on West Fayette. Tickets will go on sale this summer and are not a part of the subscription series.