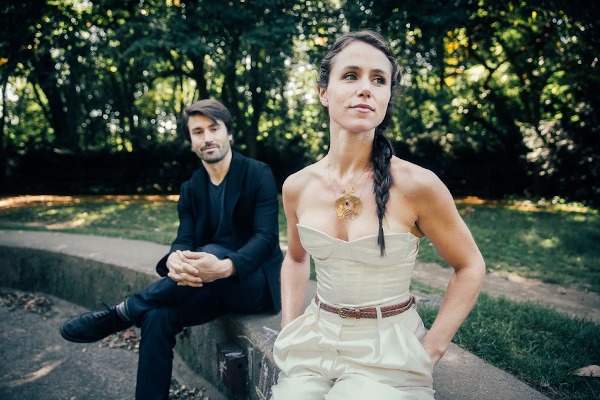 Praised by Fred Hersch as “a first-rate musician in every way,” vocalist and composer Joanna Wallfisch moved to New York from her native London in 2012. Her debut CD Wild Swan featured jazz talents on the order of Rob Garcia, Joe Martin and Sam Newsome. Her 2015 follow-up, The Origin of Adjustable Things (Sunnyside), is an intricate, sonically enveloping duo project with acclaimed pianist Dan Tepfer.
Hailing from an immediate and extended family of accomplished musicians (her mother a baroque violinist, father a cellist, one brother a film composer and conductor, the other an opera singer and cellist), Wallfisch earned a Masters in Jazz Performance from London’s Guildhall School of Music and Drama in 2012.

Wallfisch has fashioned a musical identity of her own, drawing on jazz, theater, cabaret, dance, performance art and other disciplines. She plays piano and flute, works extensively with live vocal looping, and has even been known to do skillful maneuvers on a trapeze while singing and playing ukulele onstage. In addition to her output as a solo artist, Wallfisch has done work for film soundtracks—her song "Satellite" features on new movie Pressure, starring Danny Huston, while other vocal and lyric credits include All the Beautiful Things (Sundance), Desert Dancer, Dear Wendy, Summer in February, and also commercials.

Born in Paris to American parents, “tremendously gifted” (LA Times) pianist-composer Dan Tepfer has translated his bi-cultural identity into an exploration of music that ignores stylistic bounds. His 2011Goldberg Variations / Variations, which pairs his performance of Bach’s work with improvised variations of his own, has received broad praise as a “riveting, inspired, fresh musical exploration” (New York Times). He has worked with the leading lights in jazz, including extensively with saxophone luminary Lee Konitz, while releasing seven albums as a leader. As a composer, he is a recipient of the Charles Ives Fellowship from the American Academy of Arts and Letters for works including Concerto for Piano and Winds, premiered in the Prague Castle with himself on piano, and Solo Blues for Violin and Piano, premiered at Carnegie Hall.

Bringing together his undergraduate studies in astrophysics with his passion for music, he is currently working on integrating computer-driven algorithms into his improvisational approach. Awards include first prize and audience prize at the Montreux Jazz Festival Solo Piano Competition, first prize at the East Coast Jazz Festival Competition, and the Cole Porter Fellowship from the American Pianists Association. His recent soundtrack for the independent featureMovement and Location was voted Best Original Score at the 2014 Brooklyn Film Festival.

"Joanna Wallfisch is a real discovery. Her clear and supple voice is able to convey her original compositions - and some imaginative covers - with great use of vocal color, superb diction and a strong emotional connection to what she sings...She is a first-rate musician in every way." —Fred Hersch

DISCOUNT PARKING
Park at the Franklin Street Garage (at the corner of Charles & Franklin Streets) for just $2 on evenings and weekends. You must pick up a voucher at An die Musik in order to receive the discounted rate.