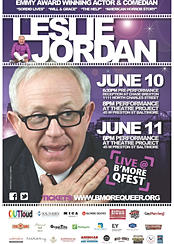 Join B'More QFest as it kicks off its inaugural year with Leslie Jordan, most well-known for his Emmy-winning role as Beverly Leslie on the hit show Will and Grace, performing his one-man show Fruit Fly: Do Gay Men Become Their Mothers?

Jordan's multi-media presentation of Fruit Fly is an ode to his mother and all mothers of gay men. In Fruit Fly, Jordan recounts his mother's early recognition of her son's flair for the flamboyant at an early age. She knew that he would face challenges in Chattanooga, Tennessee, when she saw him sporting a pair of red cowboy boots.

In addition to Beverly Leslie, Jordan is also known most recently as Mr. Beckly the editor in The Help and in the most recent season of American Horror Story: Coven.