50% OFF TICKETS TO AUGUST WILSON’S “THE PIANO LESSON” @ THE OLNEY THEATRE CENTER: UNTIL MAY 2 ONLY

CREATE & COLLABORATE @ THE PRATT LIBRARY THIS MAY

We offer dozens of free events and classes each month. Check the Pratt Calendar for more!

THIS WEEK @ THE PEABODY INSTITUTE

Faculty member Richard Stone, lute and theorbo, will present a master class for guitarists on Monday, April 28, at 5:00 pm, in the Conservatory Building, Room 209C.

Tonight, Monday, April 28, at 8:00 pm, students from Marina Piccinini's flute studio will be performing an end of year recital, including the world premiere of Imaginary Voyage II by Peabody faculty member Mark Janello and works by Beethoven, Boulez, Higdon, Hindemith, and more.

Tomorrow, Tuesday, April 29, at noon, the Music Entrepreneurship and Career Center will present Clint White in a talk titled "Transformative Marketing for Musicians." The free talk, open to the Peabody community, will take place in Room 206C (Conservatory Building).

On Tuesday, April 29, and Friday, May 2, from 2:30 pm to 7:00 pm, student chamber music ensembles will play works from the vast chamber music literature, from the baroque era to the great classical, romantic, and modern eras. The free recitals will be held in Cohen-Davison Family Theatre.

Faculty artist Leon Fleisher will guest conduct the Peabody Symphony Orchestra on Thursday, May 1, at 8:00 pm. The orchestra will perform Johannes Brahms' Academic Festival Overture, Op. 80; Frank Martin's Concerto for seven wind instruments, timpani, percussion, and string orchestra; and Ludwig van Beethoven's Symphony No. 5 in C minor, Op. 67. Tickets for the performances, in Miriam A. Friedberg Concert Hall, are $15 for adults, $10 for seniors, and $5 for students with ID. To purchase tickets, call the Peabody Box Office at 410-234-4800.

The Peabody Institute will be open to the public during Flower Mart—Friday, May 2 and Saturday, May 3—from noon to 5:00 pm. Tours will be given of the Institute and activities will occur in the George Peabody Library. Several concerts and student recitals will be presented, including Peabody Dance performances on Saturday, at 1:00 pm and 2:00 pm, where students will perform selections from A Midsummer Night's Dream and a spring Garland Dance in Peabody's DLA Piper Plaza. An encore performance of This Is My Voice will take place with members of the Preparatory Wind Orchestra and Tia Price, mezzo-soprano, on Saturday at 6:30 pm in Cohen-Davison Family Theatre.

On Friday, May 2, at 4:00 pm, in Turner Auditorium at the JHU Medical Campus in E. Baltimore, the Occasional Symphony will conclude its season with a free concert featuring The Rite of Spring by Igor Stravinsky and the world premiere of Nocturnal by Scott Lee (MM '13, Composition).

The Peabody Children's Chorus will perform on Saturday, May 3, at 3:00 pm, at Old St. Paul's Church, 233 North Charles Street, and Sunday, May 4, at 3:00 pm, in Peabody's Miriam A. Friedberg Concert Hall. The chorus is directed by Doreen Falby with Bradley Permenter as associate director and accompanist, and Julia Sheriff as assistant director and accompanist. Sarah Dudas will be the featured violin soloist, and the program will include music by Zoltán Kodály, Dmitri Kabalevsky, and Benjamin Britten. Advanced tickets required; ticket prices are $2.75. To reserve a ticket for Saturday, email sspicher@jhu.edu. To purchase tickets for Sunday's concert, call the Peabody Box Office at 410-234-4800.

Peabody Brass Ensembles and the Mid Atlantic Trombone Choir will perform in a free Brass Bash on Sunday, May 4, at 7:30 pm, in Miriam A. Friedberg Concert Hall. Works by Steven Frank, Frank Gulino, Henry Mancini, Dmitri Shostakovich, Launy Grondahl, Astor Piazzolla, and more will be presented.

On Sunday, May 4, at 7:30 pm, the Lynn Taylor Hebden Preparatory Recital will take place in Hilda and Douglas Goodwin Recital Hall. The free recital features the winners of the Preparatory Part-Recital Competition.

On Friday, May 2, at noon, Jared Harrison, flute, will perform on the free Peabody on the Court recital in the sculpture court of the Walters Art Museum, 600 North Charles Street.

Conservatory student recitals are free and open to the public. For a list of recitals including student name, degree program, instrument/voice, date, time, and hall, visit peabody.jhu.edu/recitals.

Winter is finally over. We have longed for the birds to come back. We were wrong…

Put A Bird On It is a delightful and suspenseful evening of opera, narrative, puppetry and more than a few feathers. 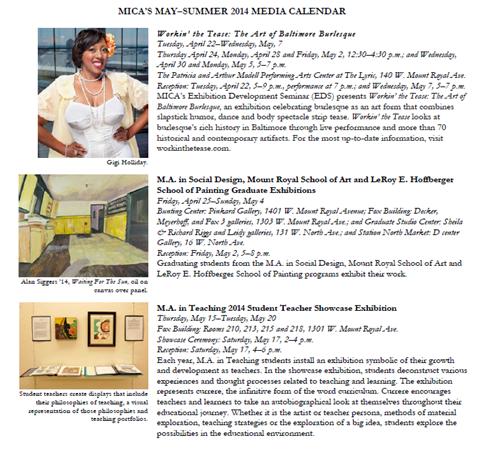 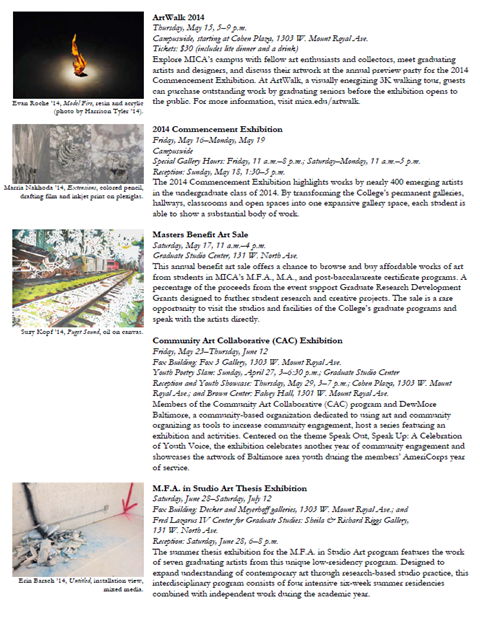 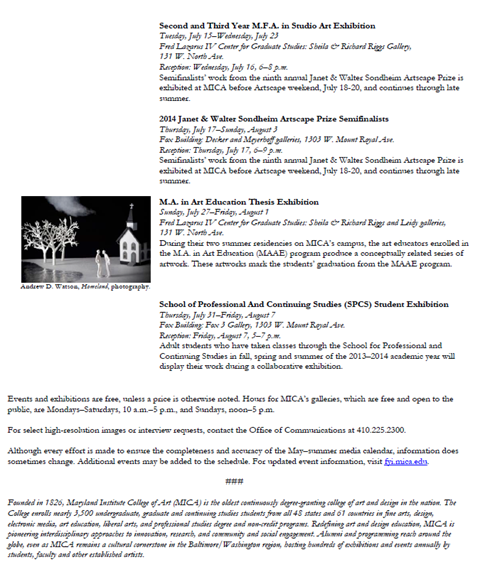 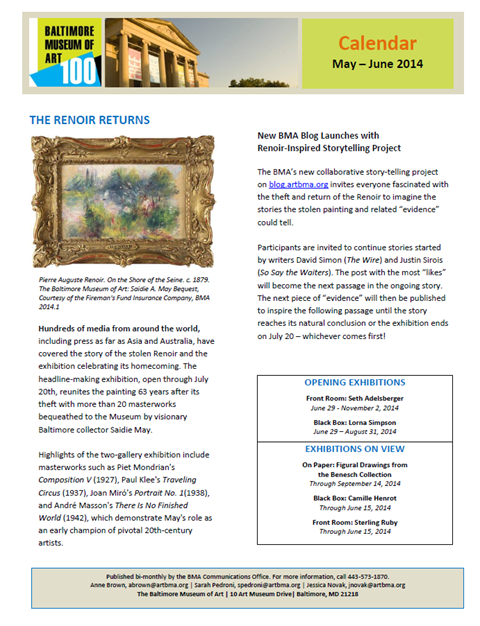 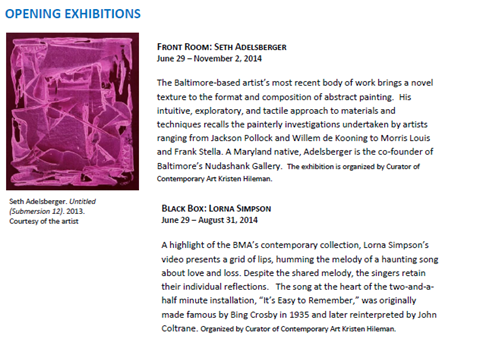 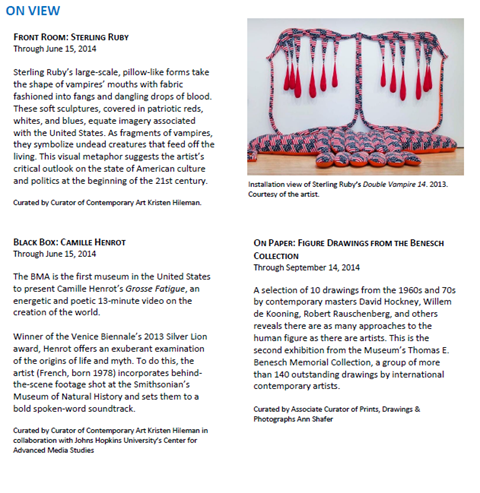 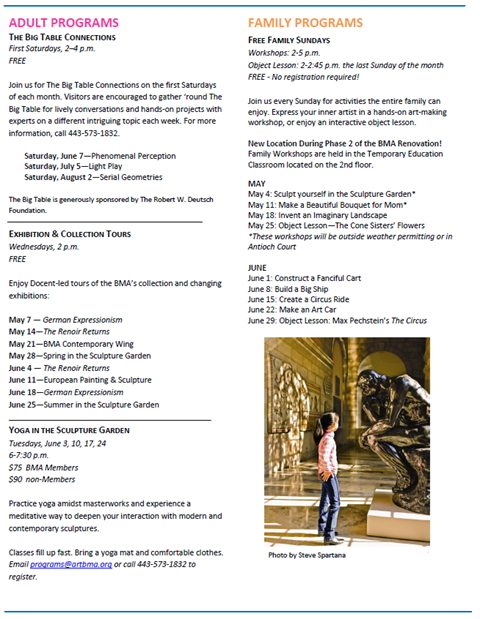 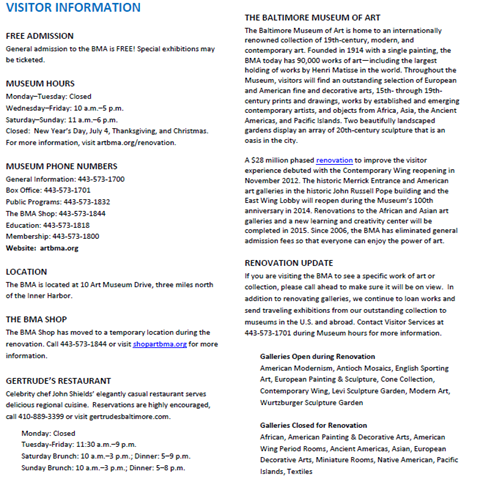 Email ThisBlogThis!Share to TwitterShare to FacebookShare to Pinterest
Labels: Baltimore Museum of Art

BACH IN BALTIMORE PRESENTS FREE CONCERT ON MAY 4 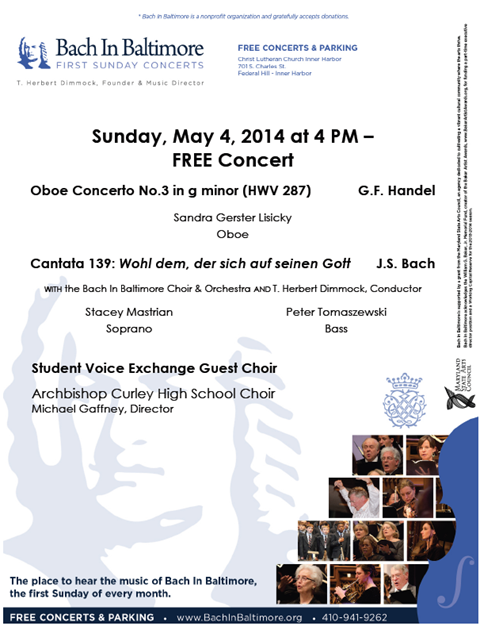 Have a blast while stretching & shaping molten glass into a colorful flower. We'll help you create an extraordinary gift just in time for Mother's Day. Make one for yourself too. These flowers last forever!

Show your love to Mom with locally made art.
Visit Corradetti Glass Gallery—both Clipper Mill & Hunt Valley locations have hundreds of quality blown glass pieces on display, each one uniquely made by Anthony.

Let us help you select a lovely Mother's Day gift that will blow her away!

In our weekend classes, students will work intensively over the 6 hour day to learn or improve glassblowing skills. Private instruction, corporate activities & school visits also available. May 18 is our final class before Summer shut down.
Look here for 2014 class schedule & registration

HOST YOUR EVENT AT CORRADETTI GLASS