Painter Evan Boggess exhibits mixed media works drawn from his childhood in the West Virginia mountains. He says that his paintings behave like sculpture requiring the audience to physically move through the work.

According to Boggess, each painting in this exhibition begins as a representational study of a directly observed raw mineral and many of the minerals used also appear in the list of ingredients on tubes of paint.

“Pressure, heat, and time are the conditions that shape earth’s metamorphic minerals. They are also the conditions under which I have structured the paintings in this exhibition,” explains Boggess. “I excavate pressure, heat and time out of the context of mineralogy and translate them into the language of painting.”

He has a Master of Fine Arts degree from Maryland Institute College of Art. http://evanboggessart.com 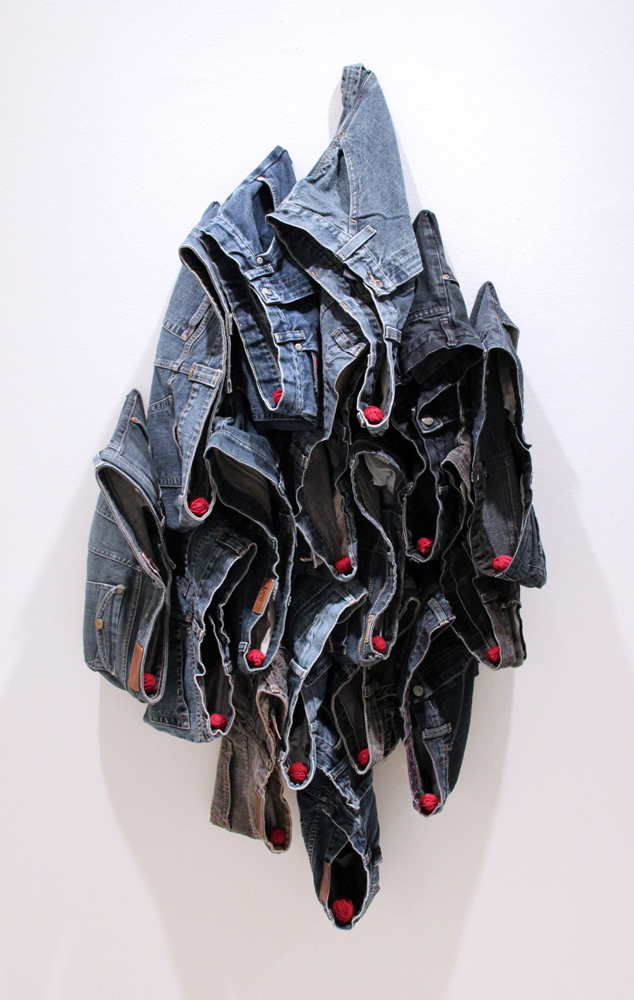 Her artwork revolves around what she calls her “central awareness: animate becomes inanimate, inanimate becomes animate—body becomes object, object becomes body—as I create representations of my physical space. A shadow, a trace, is retained. It is my body, but it is not.”

She says that she hopes by weaving together memories, myths and facts, her art may provoke a subtly skewed awareness of the ordinary, and a deeper understanding of physical and psychological relationships to place. Recently, she has found herself working in multiples, and her process and performance works often interpret the impact of social events frequently relying on audience participation.

Falk grew up in Michigan and studied art at Michigan State and Portland State University. She has a Master of Fine Arts degree from Carnegie Mellon University and is currently a visiting assistant professor,gallery coordinator and technician in the Art and Art History Department at the College of William & Mary. http://naomijfalk.com

“My work exploits a range of opposites,” said Ober. “I combine unrelated images and text to form layers of (mis)understanding,  reinterpreting sentimental imagery through layers of drawing, painting and printmaking. I employ a collage aesthetic in all my work, although my materials include paint on canvas, collage of paper, gold leaf and a variety of drawing media.”

A graduate of Maryland Institute College of Art (MICA) with a Master of Fine Arts degree in painting, she earned a Bachelor of Fine Arts degree from AmericanUniversity. She received a 2006 Maryland Individual Artist Grant for painting and took second prize in the 2007 Bethesda, Md., Painting Awards. She was awarded the Warhol Grant for Emerging Curators in 2006 and a “Best in Show” award in the Juried Painting Exhibit at the Torpedo Factory, Alexandria, Va., in 2006.  http://caraober.com

An exhibition of photographs by Susan Ruddick Bloom, an Art and Art History professor at McDaniel. Bloom records ephemeral moments and often her search leads her to travel to areas as different as primal swamps filled with alligators, remote villages in central Turkey, glaciers in Iceland and Dutch gardens.

Her love of drawing and painting play a part in her photographic interpretations. Although she has been involved with many mediums, she has concentrated in digital fine art photography for the past 20 years. Her work appears in several private collections and is shown regionally. She isalso the author of “Digital Collage and Painting” about the fine art applications of the computer.

Bloom has a Master of Fine Arts degree from Maryland Institute College of Art. http://www.suebloom.com

MAUREEN DRDAK: Contemporary Art Production in the Land of the Living Gods
WHEN: Tuesday, September 17, 7 PM
WHERE: McDaniel Lounge

Global artist Maureen Drdak travels widely in pursuit of her visions, including Europe, North Africa, the Middle East, India, Nepal, and the Himalayas. She was a Fulbright Scholar in 2011.

Her work incorporates ancient repoussé techniques transmitted from Nepali Masters, rich in eastern and western iconographies and cultural paradigms, branching the boundaries between material realms and practices. She says that it references universal paradigms of mythic archetypes, their capacity for cultural bridging, and their relevance in contemporary space — both ancient and contemporary forces converge in her monumental paintings.

She is a graduate of the Pennsylvania Academy of Fine Arts and the University of the Arts, with additional studies at Temple University and the Barnes Foundation in Philadelphia. http://www.maureendrdak.com

Joyce J. Scott, known as the “Queen of Beadwork,” is an internationally renowned fiber artist, sculptor, jeweler, printmaker, performer, and installation artist, specializing in weaving, quilting, beadwork and glass. She is also active in arts education. A native of Baltimore, she lives in the same neighborhood where she was raised.

Her beaded sculptural forms and neckpieces are provocative and confrontational,addressing contentious political and social issues, such as gender, race and class struggle. She said, “I believe in messing with stereotypes, prodding the viewer to reassess. It’s important for me to use art in a manner that incites people to look and then carry something home — even if it’s subliminal — that might make a change in them.”