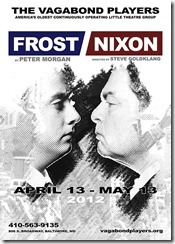 The Baltimore premiere of the 2007 smash Broadway hit

Frost/Nixon
By Peter Morgan and
Directed by Steve Goldklang 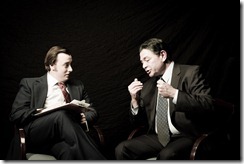 In 1977, playboy talk show host David Frost negotiates the most publicized and controversial TV interview of the decade. Will he be the one to elicit an apology from Richard Nixon, the President who was accused of committing one of the most notorious felonies in American political history? The fast-paced political thriller examines the behind-the-scenes machinations that lead to uncovering the truth.