Join the William and Irene Weinberg Family Baltimore Jewish Film Festival, celebrating its 23rd year with eight films of Jewish interest! All of these highly acclaimed films are followed by prominent guest speakers that will be announced at a later date.

The mother of a fragmented family in a poor neighborhood in Poland in the mid-60’s spends most of her time working to provide the basic needs for her 10 and 14 year old sons. Left to their own devices, the boys join a neighborhood gang with a strong Neo-Nazi orientation. A Holocaust survivor, she thought that she was protecting her sons by concealing her past and origins, but now she must tell them that she is a Jew. She takes the older boy into her confidence, but the younger son is told that they are immigrating to Australia, while the truth is that they are boarding a ship to Israel. The film explores the struggle to form an identity in a new country, while trying to build a new life.

Growing up in a Palestinian refugee camp, 14-year-old Ali (Neil Belakhdar) learned to hate Jews at an early age. After he and his family escape to a new life in Berlin, Ali longs to be accepted by his fellow Arab youths in the public housing project. In a test to prove himself, Ali breaks into the apartment of his neighbor Alexander (Ryszard Ronczewski, Along Come Tourists), an elderly Russian Jewish war veteran. Ali’s “friends” follow him into the apartment and vandalize it with abandon. When Alexander unexpectedly returns home, he recognizes only Ali and reports him to the police. To avoid being sentenced and deported, Ali is forced to seek out the trust and forgiveness of his enemy.

As the son of the Imam of the local Brooklyn mosque, eleven year-old Daud has to juggle the high expectations of his Father (Maz Jobrani) and his feelings of isolation—even from his peers in the Muslim community. Through an innocent act of good faith, Daud inadvertently befriends a group of Jewish boys who mistake him as a fellow classmate at their orthodox school, in the neighboring Jewish community. A genuine friendship grows between Daud and Yoav, one of the Jewish boys, and his family. Unable to resist the joy of a camaraderie that he has never felt before, David, as he is known to the kids, is drawn into a complicated dilemma inspired by youthful deceit and the best of intentions

Dawn is breaking on the morning of February 1, 2003, above West Texas when the peace of the early morning is shattered by two loud bangs. The Space Shuttle Columbia is announcing its return home. The shuttle is speeding toward a Florida homecoming, but in an instant onlookers and controllers in Houston realize that something has gone horribly wrong. The shuttle has broken up, vanished! Gone is its precious cargo of seven astronauts from around the world. Among them, Col. Ilan Ramon, Israel’s first Astronaut.

Also gone is a tiny Torah scroll—smuggled into a concentration camp during the Holocaust; safeguarded by Joachim Joseph, a Holocaust survivor; and carried into space by Col. Ilan Ramon (above). This unique story interweaves the heights of scientific achievement, the depths of a nation’s cruelty, the private grief of a boy who came of age during the Holocaust, and the public mourning of many nations in the aftermath of the Columbia Shuttle disaster. An Article of Hope, fulfills the promise that a boy in Bergen-Belsen concentration camp made during the Holocaust—to use the Torah scroll to tell the world what happened in the camp. This film explores the journey of the Torah from pre-World War II Europe, to Israel and then to space.

Yoni is almost 13, gifted, but physically undeveloped. He struggles daily to grow up before his upcoming Bar Mitzvah. He sells homework in order to secretly buy a body-building wonder powder, he stretches every night with heavy weights tied to his legs and screams with full force in front of the wind to thicken his girlish, unstable voice. His new classmates, a year older and two heads taller, bully him every chance they get and his parents barely say a word to each other and communicate through him. As if all this isn’t enough—only a week before the ceremony—his autistic brother, Tomer, 17, hidden for years in a hostel that is now shut down—returns home. This shakes not only Yoni’s life, but the unstable foundation of the entire family. 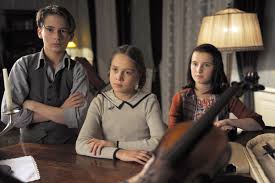 From the producers of Europa, Europa comes this universal tale of musical prodigies whose friendship overcomes barriers of religion and nationality. Jewish siblings Larissa and Abrascha are violin virtuosos. Hanna, a young German girl, is also extremely gifted. Living in the small Ukrainian town of Poltava in 1941, they are united by a passion for music. When the Nazis invade, the children’s Jewish and German families must save each other from the forces of both fascism and Communism. Real-life musicians Elin Kolev and Mathilda Adamik, along with child actor Imogen Burrell, give endearing performances in this mesmerizing Holocaust drama that is told from a child’s point of view.

Manuel spent 18 months in Buchenwald. Shortly before returning to Paris, he had already started to wonder how he could talk about this experience. Who will listen? Who will have the necessary patience and compassion? That summer of homecoming, in 1945, in his encounters with men and women from outside, sensitive to his gaze, a devastated gaze, Manuel chose silence. A silence of survival. In fact, he's not certain that he survived at all...