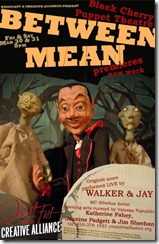 Black Cherry Puppet Theater’s Between Mean: What would happen if the devil stole a man’s wife only to send her home because she was so ornery? Black Cherry Puppet Theater debuts an astounding new work, with film influences from Kurosawa to Cat Ballou and a backdrop tinged with Appalachian myth. Since last fall, Black Cherry has been working with folk icons Walker & Jay (Walter Teret & James DiLisio) to write original music as the haunting soundtrack for this beautifully constructed work of visual theater. “QuestFest has given Black Cherry a big challenge, but risk taking is an important element to the festival. We are thrilled that Black Cherry has accepted the challenge and we look forward to joining all of you at the Creative Alliance in a couple of weeks to see the results,” Tim McCarty, Quest Visual Theater Founder/President /Artistic Director.

Katherine Fahey’s “Elizabeth Whitmore” is a shadow puppet show and an old time cranky with live musical accompaniment, based on a 1978 song set to the tune of an old shape note song. Elizabeth Whitmore, a regional heroine, survives winter while caring for her small child in the wilds of Vermont in the mid-eighteenth century.

QuestFest 2012, the biannual premier international visual theatre festival produced by Quest Visual Theater returns to the Baltimore/Washington area, featuring an international roster of deaf and hearing artists in an array of family-friendly, cutting-edge work that welcomes all people to the fascinating world of visual theatre. Festival performances begin the first week of March and the festival gets into full swing March 25-April 8, 2012, with a two-week long festival of performances and workshops in venues and schools throughout the area.  Quest is presenting the festival in partnership with Gallaudet University in Washington, Joe’s Movement Emporium in Mount Rainier, Md., Imagination Stage in Bethesda, Md., and the Theatre Project and Creative Alliance in Baltimore.