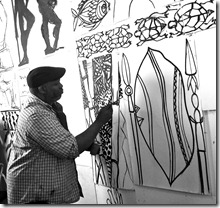 Four hundred and one black and white drawings, tiled together to fill CA’s Main Gallery, comprise Joseph Norman’s epic telling of the Middle Passage, which delivered 10 million souls from Africa to the Americas between the 15th and 19th centuries. Cannons boom, hands are lifted to the sky and an overwhelming sense of humanity suffuses the work, which employs elegant symbols resembling ancient pictographs to engage the viewer with experiences that would otherwise be too horrific to bear.

The drawings in the Middle Passage Mural are intended as the source drawings for what will be the largest lithographic mural in the world, and potentially it’s most significant monument to the Middle Passage, in which up to 5 million Africans perished. A series of programs, including performances, lectures, screenings and workshops, provide additional context for understanding an event whose reverberations are still felt today.

A Resident Artist at The Patterson since 2010, Norman is a major figure in African American painting, widely considered one of the world’s great draftsmen and printmakers, and something of a Hemingway-esque figure. Born in the industrial area bordering the projects of the storied South Side of Chicago, Norman had a promising football career ahead of him until art (and a knee injury) intervened. Since 1980, he’s lived and taught all over the world—Cuba, Ecuador, Seville, Costa Rica, Newport, Berlin—and is currently Dean of Drawing at University of Georgia in Athens.